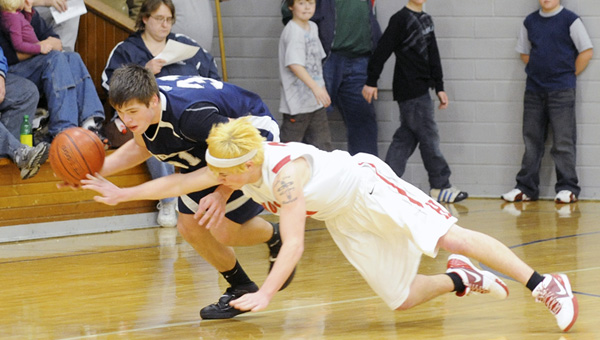 Glenville-Emmons’ Landon Hall scrambles for the ball Friday during the second half against Houston. -- Andrew Dyrdal

“Our kids made shots and deserve all the credit for that run,” Wolverines head coach Dan Fredrickson said. 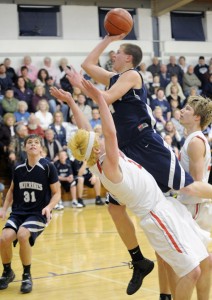 Glenville-Emmons’ Andrew Lau attempts a shot Friday during the second half against Houston. Lau made the shot for two of his game-high 22 points and helped lead the Wolverines to a 62-50 win. -- Andrew Dyrdal

The Hurricanes offense stalled when the Wolverines went into a 1-3-1 zone defense midway through the second half. The Wolverines’ Landon Hall scored four quick points to pull Glenville-Emmons ahead 42-37 before Woodside knocked down a 15-foot jumpshot and scored off an offensive rebound to go up 48-37.

“Woodside was the rock tonight,” Fredrickson said. “He was bringing it in the first half and my message at halftime was that we had to match his intensity level.”

On the following possession, Lau was fouled on an offensive rebound and scored two of his game-high 22 points from the free throw line before the Hurricanes’ Chris Stackhouse made two free throws to pull Houston within 48-39.

Wyatt Madsen then scored off an offensive rebound and Hall scored on a layup to cap the 14-2 run.

Fredrickson said that the zone defense overextended the Hurricanes’ guards and that was the difference in the game.

“I thought we won the game defensively in the second half,” he said.

The Wolverines got off to a fast, emotional start in the first half in front of a large crowd and four different media outlets.

Lau and Woodside combined for 16 of the team’s first 19 points.

Ahead 5-2 early in the first half, Woodside stole the ball and went coast to coast for a layup before feeding Lau on the following possession for a 3-pointer. Woodside then scored off an offensive rebound and Lau converted a four-point play as he was fouled on a made 3-pointer and knocked down the free throw to pull the Wolverines ahead 18-10.

“They mesh and play very well together,” Fredrickson said, of Woodside and Lau. 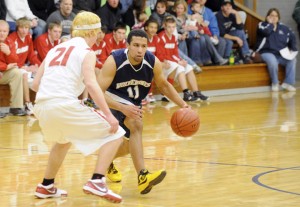 Perry Kirsch brings the ball down the floor in a 62-50 over Houston. The Wolverines improved to 12-0. -- Andrew Dyrdal

But the Hurricanes stormed off Wolverine turnovers and pulled within two points on four different possessions.

“They did a good job pressuring our guards and kept us out of rhythm offensively,” Fredrickson said. “That’s one thing we worked on overcoming in practice but we couldn’t simulate their speed.”

The Wolverines had 12 of their 17 team turnovers in the first half.

“We were beating ourselves,” Fredrickson said. “We knew we had to get into a flow offensively.”

The Hurricanes tied the game at 42-42 to open the second half but never led during the game. They pulled within a point on three different possessions before the Wolverines’ run put the game out of reach.

Ryan Dempewolf and Hall each scored six points and Wyatt Madsen had six and Tyler Belshan two off the bench.

“Those two off the bench were big tonight,” Fredrickson said. 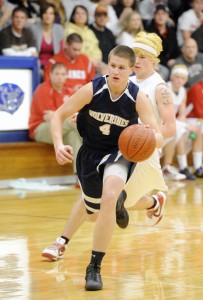 Despite the large crowd and media attention, Fredrickson thought his players were poised. He said otherwise about himself.

“For the first time ever I had a little bit of anxiety tonight coaching,” he said. “But it was a great atmosphere.”

Stackhouse led the Hurricanes with 17 points while Tyler Peplinski and Connor Caruso chipped in eight and seven, respectively.