A.L. man gets 5 years for sex with minors 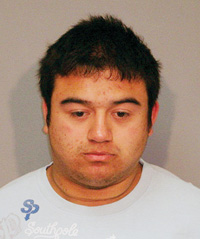 These were the third and fourth criminal sexual conduct convictions for Lorenzo Martin Torres, 21.

Chesterman sentenced Torres to one year for the fifth-degree charge and five years for the second-degree charge. Both sentences will run concurrently.

He will also get credit for 220 days already spent in custody and will be eligible for release after spending two-thirds of his five years.

Freeborn County Attorney Craig Nelson said because this is a sex crime, Torres will not be released until a psychological evaluation is conducted.

If prior to his release, it is determined that Torres poses a strong likelihood of reoffending, Nelson may be asked to commit him as a sexually dangerous person. That would include an indeterminate sentence.

If Torres is released, he will be under intense supervised release for 10 years. If he violates the terms of this release, he could serve up to 10 years in prison.

He will also always have to register as a sex offender.

He was on probation for the third-degree charge when the new charges were brought against him last June.

Torres acknowledged he violated his terms of probation in December, when he pleaded guilty to the new charges.

After doing so, he was immediately sentenced to four years in prison. Torres was brought back from prison for Friday’s sentencing.

The four-year sentence from December will also run concurrently with Torres’ new sentence.