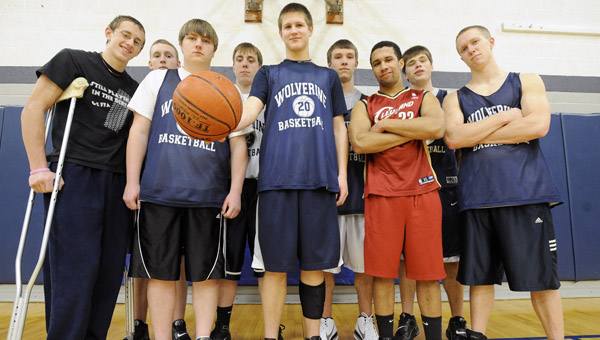 GLENVILLE — The Glenville-Emmons boys’ basketball season was supposed to be predictable.

After finishing third in the Southeast Conference last season, the Wolverines returned many of their top players, including team MVP and All-Conference guard Peter Hansen.

Wolverines head coach Dan Fredrickson expected his team to compete for their first Southeast Conference championship this season and knew he had the players to finally do it.

He was right as the Wolverines won their first three games by an average of 36 points, including the first win at Spring Grove in school history.

The Wolverines cruised into their fourth game of the season at Austin Lyle/Pacelli but early in the first half, disaster struck. The Wolverines’ dream season flashed before Fredrickson’s eyes as Hansen hobbled off the court with an ankle injury. 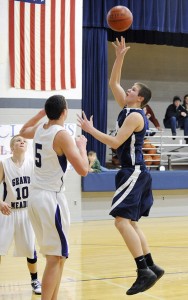 Glenville-Emmons’ Andrew Lau shoots a hook shot against Grand Meadow earlier this season. Lau is averaging 22 points per game after starting the season on the bench. -- Andrew Dyrdal/Albert Lea Tribune

“I figured it was just a sprain,” Hansen said. “I wanted to get off the court, tape it and get right back into the game.”

But Hansen never returned. X-rays showed that his right ankle was broken and doctors told him he would be unable to play for at least two months. After playing in just three games Hansen would have to sit 17 straight.

“I just put my face into my hands and wondered why this had to happen to me,” said Hansen, who averaged over 18 points during his senior season before the injury. “I was really looking forward to this year and then it got taken away.”

The Wolverines had to keep playing. They beat Mabel-Canton the following game 62-39 as Hansen watched from the bench with his ankle in a cast.

Hansen is “the heart and soul of our team no matter what,” Fredrickson said. “Even after eight games we’re still getting over the loss of Pete. That’s how much he meant to this basketball team.”

The next game against Schaeffer Academy at home, the Wolverines injury woes worsened. After averaging nearly 13 points per game, starting sophomore guard Derek Olson felt a pop in his leg and was later diagnosed with a severely pulled hamstring and stretched tendon.

Olson still hasn’t returned, and the Wolverines marched on without their two starting guards and best defenders. But the team didn’t stop chasing the conference title, and as the lopsided wins piled up, the Wolverines started chasing perfection.

The Wolverines are currently a perfect 11-0 and have already won arguably their toughest test of the regular season at Lanesboro on Jan. 14. They rank in the top 20 of Class A in points scored, points allowed and points differential, and won their first eight games by no fewer than 17.

“We know we’ve got some tough games coming up and going undefeated sounds like a lot,” Fredrickson said. “But if we break it down game by game I feel like we can reach higher than our opponents. I think we can definitely run the table.”

Getting Hansen and Olson, who could return within a week, back is a big step in chasing a perfect regular season but out from the shadow of their injuries rose a new star who’s having one the best seasons in Glenville-Emmons history.

Senior forward Andrew Lau began this season on the bench as a role player. His name didn’t even make Tribune stories before Hansen was injured, but now he’s stealing headlines — most notably for scoring a school-record 43 points against Immanuel Lutheran on Jan. 14.

“He has always been a gifted player,” Fredrickson said. “When Pete went down you could see the fire in his eyes, and he knew he needed to take over.”

Lau followed his 43-point performance with 18 points against Lanesboro and another 34 on Monday against LeRoy-Ostrander on 15-of-20 shooting.

“I’m in better shape and more explosive and aggressive,” said Lau, who’s averaging 22 points per game. “I’m more of a leader this season so I try to get into the paint and score.”

Another role player who shifted into a leadership role once Hansen went down is senior Landon Hall. Hall moved from small forward to point guard where he’s quickly becoming one of the top ball hawks in the SEC and is on pace to break the school record for most steals in a season.

Another senior, Tyler Woodside, has been a force in the paint playing opposite Lau and has numerous double-doubles on the season.

Regardless of their regular season record, the Wolverines would also like to make school history by playing in the section finals with a chance to advance to their first state tournament berth.

For Hansen, that’s worth waiting for.

“It sucks I can’t be out there with my teammates but as long as they’re winning and I’m a part of it on the bench or taking stats I’m happy for them,” he said. “I’ll be back for the section tournament for sure, and that’s what I really want to be back for to make a run at a state appearance.”

The Wolverines go for win No. 12 at 7:15 p.m. tonight against Houston in Glenville. Houston is currently 6-1 in the SEC and one game behind the Wolverines for first place. The gym is expected to be packed.

Nature has its own brand of entertainment