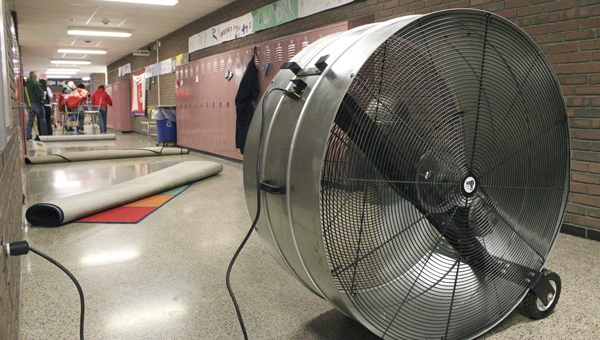 A large fan dries the hallway this morning outside Lakeview Elementary School’s Room 119. A fire Thursday night made the sprinklers go off, causing some water damage. School was canceled for students Friday. -- Kelli Lageson/Albert Lea Tribune

Classes were canceled today at Lakeview Elementary School because of a fire late Thursday evening that has resulted in water damage.

Albert Lea Police Chief Dwaine Winkels said investigators suspect a person — or people — broke into a classroom on the lower level of the school and started the fire. Police do not have a description of a suspect. They do know whether there was more than one person involved.

The official cause of the fire is anticipated to be released by Albert Lea Fire Department investigators later today. 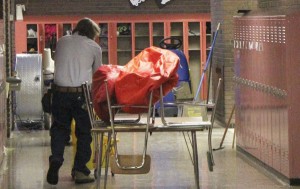 A custodian walks through the hallway this morning at Lakeview Elementary where there was standing water from a fire Thursday night. -- Kelli Lageson/Albert Lea Tribune

Firefighters and police officers responded to school alarms at about 11:15 p.m. Thursday.

Eric Hudspith, director of facilities and transportation for the school district, said the fire was in Room 119, Mark Nechanicky’s fourth-grade classroom. Nechanicky won Teacher of the Year in 2010. Sprinklers only went on in that classroom. The sprinkler system is designed to go off in areas with smoke and fire.

Albert Lea Fire Capt. Mark Light said water spilled out from underneath the classroom door into the hallways and some of the other classrooms.

Firefighters worked to drain the water into drains in utility closets and bathrooms, and as of this morning a large fan was drying the hallway near Room 119. Custodians were working on cleaning up the area with water damage.

“The reason we don’t have school is there’s water on the floor from the sprinklers,” said Superintendent Mike Funk this morning.

Light estimated there was 1 to 2 inches of water standing before the sprinklers got turned off. Firefighters arrived at the school four minutes after they got the initial call.

He said there wasn’t a lot of damage from the fire itself, though there was a moderate amount of smoke throughout the lower level. Everything in Room 119 was wet from the sprinklers, but otherwise the only other water was on the floors.

“All in all the whole thing is pretty small compared to what it could have been as far as damage goes,” Light noted. “Once they get things dried out, I don’t think there will be an extensive amount of damage.”

He anticipated a few carpeted areas might have to be replaced.

A phone message sent out by the Albert Lea School District this morning told parents that due to water damage from a small fire at Lakeview Elementary School, there will be no classes today.

Look to AlbertLeaTribune.com for more as this story develops. Any news, of course, also gets printed in the newspaper.