Funeral services for Herbert Russell Leonhardi, 88, of Lake Mills, Iowa, will be held at 2 p.m. Friday at Emmons Lutheran Church. The Rev. Julie Fiske will officiate. Interment will be at the Oak Lawn Cemetery with military honors accorded by area veteran’s organizations. Visitation will be from 5 to 7 p.m. Thursday at Bayview/Freeborn Funeral Home and one hour prior to the service at the church.  To sign the guest book, go to www.bayviewfuneral.com. 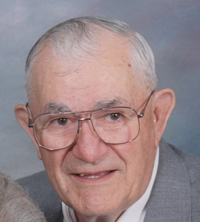 Herbert Russell Leonhardi was born on Jan. 29, 1922, in Emmons, to Adolph and Emma (Clemmetson) Leonhardi. He grew up in the Emmons area and graduated from Emmons High School. He was drafted into the United States Army during WWII. Herbert was discharged from service in 1946. He was united in marriage to Ruth Troe on Nov. 22, 1946. Herbert worked in construction with his brothers and then for Diekema Construction until his retirement in the 1980s. He was a member of Emmons Lutheran Church and a life member of both the VFW Post 447 and Glydon Iverson DAV Post 16. Herbert was an avid sports fan, playing when he was younger and taking photos of local athletes in his later years. He especially enjoyed golf and fishing.

Herbert was preceded in death by his parents; wife, Ruth; nine brothers and sisters; and many brothers-in-law and sisters-in-law.