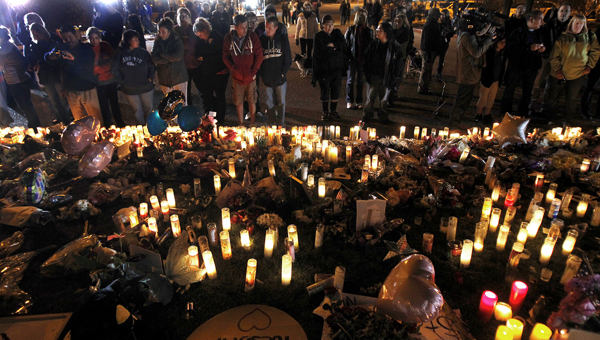 A mass is held honoring all victims of Saturday’s mass shooting in Tucson, Ariz., at St. Odilia Catholic Church on Tuesday. The city shaken by a shooting rampage that killed six people and left 14 injured came together at the church to mourn the victims, including a 9-year-old girl who sang in the choir. -- Greg Bryan/AP Photo

TUCSON, Ariz.  — They came by the hundreds, a few cradling their own small children even as they gathered to remember someone else’s baby. Young and old, some who knew the fallen and many with no connection at all, assembled only a few blocks from where tragedy struck to offer prayers for the dead and wounded — and to try and find some semblance of peace for their aching community and hearts.

The service Tuesday night at St. Odilia Catholic Church came as families prepare to bury the victims of Saturday’s shooting rampage that claimed the lives of six people, including 9-year-old Christina Taylor Green, and injured U.S. Rep. Gabrielle Giffords and more than a dozen others.

St. Odilia was little Christina’s church, and her mother sat in the front pew as nine girls, some about Christina’s age, walked toward the altar and stood singing “Amazing Grace.” As he began his mass, Bishop Gerald Kicanas noted that Christina herself had once sung with the choir, and “I know she is singing with us tonight.” 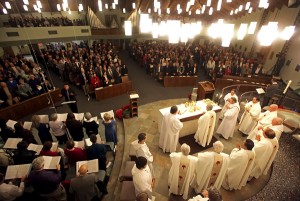 A mass is held honoring all victims of Saturday’s mass shooting in Tucson, Ariz., at St. Odilia Catholic Church on Tuesday, Jan. 11, 2011. The city shaken by a shooting rampage that killed six people and left 14 injured came together at the church to mourn the victims, including a 9-year-old girl who sang in the choir. -- Greg Bryan/AP photo

The service was intended to help a distraught community heal. Kicanas urged the more than 400 people in attendance to pray not only for the victims but for an end to violence, division and destructive words and actions.

“God wills that we resist evil. That we live with integrity. That we speak and act with civility and respect,” he said. “Everyone in our community is in grief. We are in tears. We are pained and concerned about what took place. We are a community questioning, struggling, wondering how such violence could happen.”

Inside the church, a crucifix hung from a white block wall behind the altar, adorned with a few lit candles and red poinsettias, still in place after the holidays. Children, some in their Sunday best, sat close to their parents. Several others, like 60-year-old Victoria Vaughan, attended the service alone. She said she just wanted to feel a part of the community.

“It’s really hard to sit at home and watch it on TV. It’s so isolating,” Vaughan said. “I think it’s important for people to come together and to try and dwell on peace and kindness.”

Ariel Salinas, 19, attended with her mother, Tisha, and 4-month-old daughter Abrielle. She didn’t know any of the victims but nevertheless felt compelled to come and pray for them.

“I just want to feel better about the world,” she said, as her daughter slept in a baby carriage mounded with blankets to protect her from the cold desert night. Ariel’s voice shook with emotion as she thought of what happened to Christina and then about her own little girl. “I just want to keep her safe as much as I can. There’s all different kinds of people in the world and you can only do so much to protect somebody, but I’m going to do the best that I can to protect her.”

The service drew mourners from all political spectrums.

Yvonne Ignacio, 53, is a tea party member but said she felt compelled to come to the Mass.

“I am dismayed that it’s become political. That’s disrespectful to the victims and that’s why we’re here,” said Ignacio, who is a tea party member.

Her husband, Chuck Bolotin, 53, agreed: “I did everything I could to defeat (Giffords) and yet it doesn’t make a difference. It doesn’t mean she deserves to be shot.”

The modern turquoise-and-white church is only blocks from the grocery store that was the scene of the shooting spree, and security at the service was tight. Dozens of sheriff’s deputies on motorcycles and in squad cars surrounded the church before the Mass began. About a block away, TV crews were filming after being escorted into a restricted area, away from mourners.

Inside the church, some clutched tissues and wiped away tears as they sang hymns about longing for peace and finding light in the darkness.

Kathleen Hunter, a 62-year-old retiree, said she was comforted by the bishop’s words and by a sense of togetherness that she got from the Mass. She said she was praying for her friend, Susan Hileman, the neighbor who took Christina to the event on Saturday because of the girl’s interest in politics. Hileman, her husband has said, was holding hands with Christina when gunshots rang out. Hileman was shot three times but is expected to survive.

“I was praying for healing, for Christina’s family, for all the families who have lost loved ones, for the people who’ve been shot and injured,” said Hunter.

College student Lauren DeJonghe attended the service with her mother. She had no connection to any of the victims but said that mattered little in terms of how the tragedy had affected her and the community in which she was born and raised.

“Everyone was affected one way or another,” the 21-year-old said. “Your heart just hurts.”

Reps. Walz, Giffords ‘had much in common’