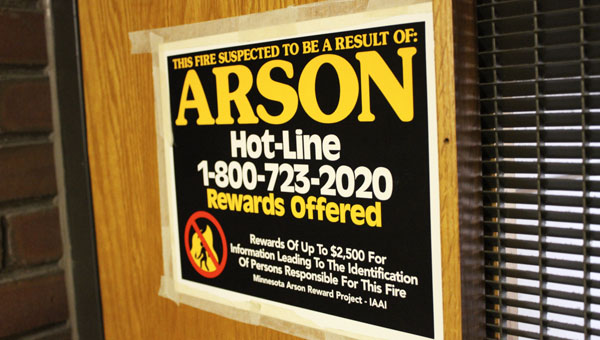 A sign posted by the Albert Lea Fire Department tells of a reward offered for any information "leading to the indentification of persons responsible for this fire." The hot line is 800-723-2020. -- Tim Engstrom/Albert Lea Tribune

Johnson said the fire appears to have originated on a workstation desk in Room 119, the classroom of fourth-grade teacher Mark Nechanicky, on the lower level of the school. At this time, officials do not know what was used to start the fire. 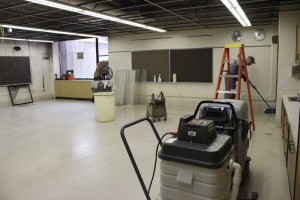 He said investigators took samples at the scene and are sending those to a lab to see if they come back positive for an accelerant.

“There’s no evidence that whoever broke in there had a personal vendetta against the teacher or the school,” he added. “It appears more likely a random act by convenience.”

He said the classroom is tucked away and is not visible from the road or the parking lot of the school.
Authorities were alerted to the fire at about 11:15 p.m. Thursday. Johnson said the motion detectors went off followed by the fire alarms. The fire was contained to a 5-foot-by-5-foot space.

More damage came from water, after sprinklers turned on in the room.

While everything got wet in the classroom, water also spilled out from underneath the classroom door onto the floors of the hallways and some of the other classrooms.

Johnson did not have an estimate on the total damages.

The school was closed to students Friday as cleanup continued. Lakeview teachers, along with custodians around the Albert Lea School District, worked at getting the first floor back to working order. 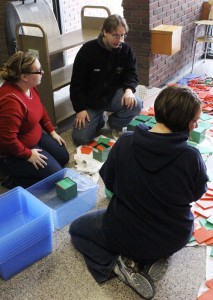 Fourth-grade teacher Mark Nechanicky, center, discusses with two other teachers how they will put math blocks back into bins. They were set out by a window in the hallway to dry. -- Tim Engstrom/Albert Lea Tribune

Room 119 was cleared out, with desks, books and learning supplies set in the hallways to dry.  Fans in open doors sent air through the hallways. (The outdoor air temperature at noon in Albert Lea was 23 degrees.) Carpets had to dry, too. Signs preventing people from walking on them.

Nechanicky, who was named Teacher of the Year in 2010, declined to comment.

Johnson said he put up a few posters about an arson hotline and a reward at the school. People can call in if they know any information about the case.

Albert Lea Superintendent Mike Funk said administrators are still targeting students to return to school on Monday, though there is a concern of the smell of smoke.

He said parents can plan for school to be in session Monday unless otherwise notified.
Nechanicky’s class will probably have to meet in the library for a couple days this week.

Look to the Tribune in print and online for more as this story develops.