Memorial services will be held at 1:30 p.m. Tuesday at Salem Lutheran Church, Lake Mills, with the Rev. David E. Jordon officiating. Mittelstadt Funeral Home, Lake Mills, is in charge of the arrangements. Graveside services will be held in July at Immanuel Lutheran Cemetery in Troy, S.D. The family requests that memorials and donations be directed to the Lake Mills Senior Citizens Club in Joyce Evjen’s name. 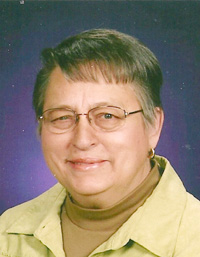 Joyce Marie (Nelson) Evjen was born Feb. 16, 1938, in Summit, S.D., to parents Clarence and Etta (Adolphsen) Nelson. She was baptized at Our Savior’s Evangelical Lutheran Church, South Shore, S.D., and was confirmed at Grace Lutheran Church, Watertown, S.D. She grew up in the Watertown area and graduated from Watertown High School in 1956.

On Aug. 4, 1956, Joyce was united in marriage to John Evjen. The couple moved to Lake Mills where Joyce found work at Monk’s Grill when it first opened. In 1958, she began working at Deluxe Products (Fleetguard/Cummins) and spent 37 years as a loyal employee. Joyce stayed active at Salem Lutheran Church with the Altar Guild and her circle’s work. She especially enjoyed preparing the baby layettes, the school kits and the health kits.

Family vacations took them back to South Dakota often where she enjoyed visiting as many family members, friends and classmates as she could in the time allowed. Reading, antiquing, and flower pot gardening were her hobbies. She also spent many years on bowling leagues with friends and was an avid fan of the Twins and the Vikings.

After her retirement, she was happy to travel more to see friends and family. Time each winter was spent in Texas and California to see her children, grandchildren, and long distance family and friends. They made many new friends at their adopted church, Grace Lutheran, in Mathis, Texas. In Lake Mills, she enjoyed meeting friends at the monthly Fleetguard retirement breakfasts as well as the weekday Congregate Meals at the Senior Center. She also loved her weekly breakfast with the girls and visiting with friends over coffee, treats and maybe a game of dice or cards.

She was preceded in death by her parents, six sister-in-laws and nine brother-in-laws, many aunts and uncles, nieces and nephews.

You can contact the family with on-line condolences at www.mittelstadtfuneralhome.om.