LAKE MILLS, Iowa — Music programs must do fundraising to survive, and one local band director found a unique way for his students to raise funds.

Ben Faugstad, Lake Mills School band director, said he found out about selling 4 Seasons Coffee as a fundraiser when a parent brought a flier to a meeting. The concert band is planning a trip to Florida in March, so students have been doing various fundraisers. 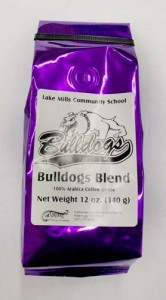 One of the bags of customized coffee for the Lake Mills band fundraiser.

“With trips you spend a lot of time fundraising,” Faugstad said.

He said the main goal is to make the cost of the trip lower for the students. Faugstad contacted David Nelson, president of 4 Seasons Coffee, and said the company was able to customize the coffee bags with a Lake Mills label.

Faugstad said the students were able to get the customized coffee bags quickly and sold them at their Christmas concert and at basketball games. Faugstad said he’ll likely use the coffee bags as a fundraiser in future years because it has been going well. Nelson said he enjoyed working with the band to help them raise money.

The company can put the label, logo or slogan on a bag of its coffee so the group or organization can then sell the coffee as a fundraiser.

Nelson said he doesn’t know what profit margins are on other fundraising items like pizzas or cookie dough, but said groups can make decent profits on the coffee.

“There’s no ordering or delivering,” Nelson said. “There’s a long shelf life on it.”

He said groups have bought the bags of coffee then sold them at stands outside events in arenas or auditoriums.

“We sell a quality coffee in there,” Nelson said. “We’ll help them make the selection.”

There are various kinds of coffees the groups can choose from, and Nelson said the company helps the groups pick out which kind of coffee would be best. He also said the fundraising program has been growing in popularity. The company has been offering customized coffee bags as a fundraiser for three years, and this is the first time the Lake Mills school has used it.

The company sells coffee throughout the Midwest and various organizations have started to take advantage of the coffee fundraiser. Faugstad’s band students are selling the bags of coffee for $10.

President Obama: ‘We can do better’