Shawn Allan Richards, 21, faces one felony count of robbery for the alleged incident June 18, during which he reportedly walked in the back door of the business, walked up to the cash register, pushed away an employee and took just over $700, according to court documents. 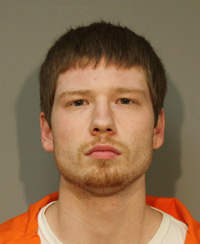 The robber was reportedly wearing a tan zip-up jacket with a hood and had a black nylon mask over his face.

Albert Lea police and Freeborn County Sheriff’s Office deputies arrested Richards Tuesday after authorities matched Richards’ DNA to a women’s black nylon found within 100 feet of the cafe. It had been collected as evidence and sent to the state Bureau of Criminal Apprehension for analysis of trace evidence.

Court records state a sample of DNA was found in the nylon and compared to a known sample of DNA from Richards. The samples matched.

During court Thursday, Freeborn County District Court Judge John A. Chesterman ordered bail be set at $50,000 without conditions and $25,000 with conditions. Conditions include abstaining from mood-altering chemicals and alcohol, staying away from bars and liquor stores, complying with random-on-demand testing, staying away from the Lakeside Café and completing a waiver of extradition, among others.

Because Richards agreed to these conditions, he has the option of paying the $25,000 option.

He is also not allowed to leave the state without prior court approval and must report to Freeborn County Court Services on Mondays, Wednesdays and Fridays while the matter is pending.

Richards was approved for a public defender and is next scheduled to appear at 1:30 p.m. Jan. 24.