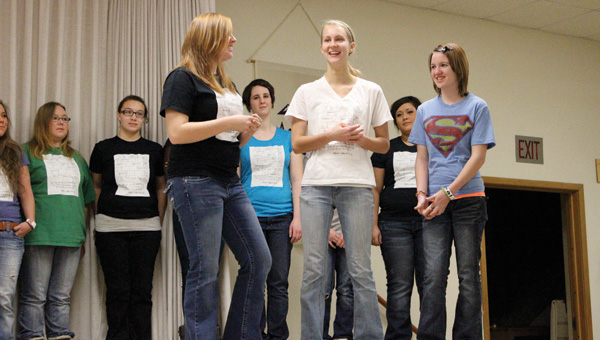 Casual use of the N-word is never acceptable.

Not all Mexicans speak Spanish.

These were just a couple of the lessons Albert Lea High School students were hoping to teach as they worked to raise awareness and squash tolerance on bullying at this morning’s 23rd annual Martin Luther King Jr. Breakfast.

Today is Martin Luther King Jr. Day, and the goal of the event was to honor the intent of King’s work promoting nonviolence.

“With the events of Tucson, we begin to see the nonviolence question is right there in from of us more than we ever anticipated,” said organizer Pat Stumme.

In addition to a breakfast of rolls and juice, those attending the event enjoyed songs from Southwest Middle School students and from Paul Goodnature & Friends. They also enjoyed original vignettes performed by the Albert Lea High School drama club, with all of their performance pieces focusing on the theme, “Yes to nonviolence, No to bullying.”

“This year, one of the big issues in school has been bullying and we thought the skits were a really positive way to highlight the issue,” said organizer Dennis Dieser. “Hopefully, they pick up ideas for peace as the community works together.”

About 20 students from Jeremy Corey-Gruenes’ beginning acting and theater class performed skits that they had written in the past month, which focus on four areas of bullying that occur in schools: race, body image, sexual orientation and social class. According to Corey-Gruenes, the skits were chosen based on what students think Martin Luther King Jr. would be concerned about today.

One example of bullying acted out by the students were mean jokes and bullying by texting, including the “outing” of a gay student in which a student was coined “queer” and “fairy.”

“We want students to realize the harm they are doing when they do these things, and think about their past mistakes,” said student performer Shelby Williams. “Some of the stuff they do, they don’t even know is hurtful, and they need to be aware.”

“A lot of people don’t see it until you point it out,” agreed student performer Debbie Norman.

This year’s Paths to Peace Scholarship winner, Martha (Nyajal) Dup, was also announced at the event. This was the sixth year for the scholarship, which is given to a high school student each year who promotes peace and justice in their lives. Dup was chosen because of a life-changing event she experienced with the group Students Today, Leaders Forever, where she traveled to college campuses to tour and perform service work this summer.

Attendees also enjoyed a song Cassi Schreiber sung, and the event closed with everyone joining together to sing, “Let There Be Peace on Earth.”

More than 100 people attended the event, held from 7 until 8 a.m. at Bethany Hall in First Lutheran Church.

After the breakfast event, the students were slated to perform again in the morning and the afternoon at Albert Lea High School.

The breakfast was organized by several community volunteers, including Stumme, Dieser, Linda Lares, Ann Austin, Paul Goodnature and Ted and Mary Hinnenkamp. They worked in partnership with Hy-Vee to provide the breakfast, and a $3 suggested donation per person was being taken at the door. Nonperishable food items were also being collected at the door, to benefit the local food bank.

Know where to vote