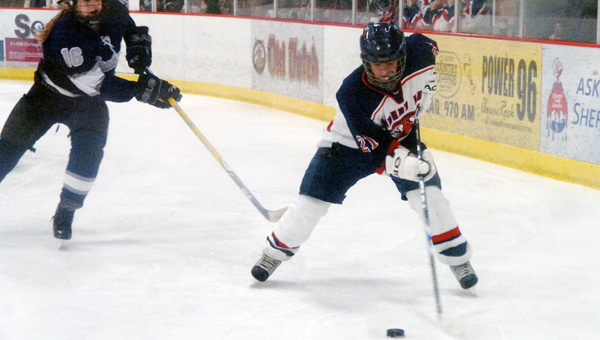 “I thought we played well,” Tigers head coach Paul Willett said. “We took care of our own end of the ice and we executed our game plan.”

The Tigers didn’t take long to put that game plan into action.

The Tigers netted two goals within 36 seconds of each other in the first period to take a 2-0 lead.

Sophia Jepson had a hand in both goals as she snapped a shot past Panthers’ goaltender Abby Cunningham at the 7:53 mark to take a 1-0 lead.

Thirty-six seconds later, the Tigers’ Megan Pulley scored a goal on an assist from Jepson to take a 2-0 lead.

In the second period, the Tigers continued to find the back of the net early on often.

Three minutes later, Natasha Moyer scored her first goal of the game on an assist from Jepson to give the Tigers a 4-0 lead.

Albert Lea wasn’t done as two minutes later Jepson scored her second goal of the game on assists from Lauren Draayer and Sage Kermes to put the Tigers up 5-0 with 4:58 left in the second period.

Albert Lea’s Natasha Moyer put the finishing touch on the second period as she scored her second goal of the game at the 15:44 mark to give the Tigers a 6-0 lead.

In the third period, the only goal came at the 5:16 mark as Anna Anderson scored a goal on an assist from Jepson to give the Tigers a 7-0 lead.

Jepson finished the night with two goals and three assists.

“Sophia played very, very well,” Willett said. “She used her speed, she distributed the puck well and scored a couple of nice goals.”

With the offense firing on all cylinders, the Tigers defense was equally as effective, holding the Panthers to eight total shots on goal.

“We’ve been playing very well defensively,” Willett said. “Our players are playing well without the puck. “

Abby Cunningham took the loss for the Panthers as she made 18 saves on 25 shots.

The Tigers hit the ice on Thursday as they travel to Owatonna to take on the Huskies.