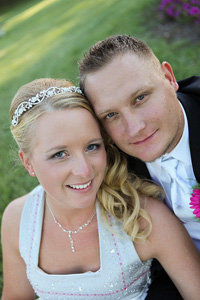 Flower girls were Danika Palmer and Micah Palmer, of Sheridan, Wyo., daughters of Robert and Regan Palmer, friends of the couple.

Ring bearer was Hayden Palmer, of Sheridan, Wyo., son of Robert and Regan Palmer, friends of the couple.

Holly Dodds, cousin of the bride, was the personal attendent.

Leah Lastovich, friend of the bride, was the scripture reader.

Rose Modderman, aunt of the bride, was the guest book attendent.

Immediately after the ceremony a reception was held at America’s Best Value Inn.

Host and hostess were Robert and Regan Palmer, friends of the couple.

Ashley graduated from Albert Lea High School, and then Crown College with a bachelor of science, and is attending Capella University for her master’s degree in mental health counseling. She is employed at Basin Vision Center.

Jesse graduated from Sheridan High School. He is employed at Wyoming Veteran’s Advocate.