Angela Wichmann and William Petersen were married at 5 p.m. on July 24, 2010, at the Wedgewood Cove Glof Club in Albert Lea. The Rev. Ken Hauke performed the ceremony. 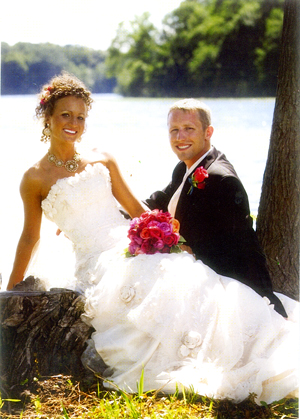 Angela is the daughter of Doug and Diane Wichmann, of Alden. William is the son of David and Shari Petersen, of Alden.

Maids of honor were the sisters of the bride, Amber Halvorsen, of Cedar Falls, Iowa, Amy Dallman and Jessica Barnick, both of Waconia.

Best man was Danny Troska, friend of the groom, of Mankato.

Groomsmen were Jason Petersen and Josh Petersen, brothers of the groom, both of Alden.

Readers were Jean Wichmann, aunt of the bride, of Spring Valley, and Sarah Linde, friend of the couple, of Richfield.

Music was provided by Jared and Shanna Dawson and the groom.

Personal attendents were Tessa and Jenna Christensen, cousins of the bride, of Albert Lea.

Hosts and hostess were George and Brenda Wichmann, godparents of the bride, of Alden, and Don and Sue Reindal, Aunt and Uncle of the groom, of Alden.

Guest book attendants were Jason, Angie, Noah and Makenna Schmidt, cousins of the groom, of Waseca.

Punch pourers were Jason and Tana Christensen, cousins of the groom, of Bricelyn.

Flower pinner was Cheri Christensen, aunt of the bride.

A reception and dance was held following the outdoor ceremony at Wedgewood.

Angie is a 2004 graduate of Alden-Conger High School and a 2008 graduate of Gustavus Adolphus College with a bachelor’s degree in elementary education. She is currently teaching second grade at Nicollet Public School, Nicollet.

William is a 2004 graduate of Alden-Conger High School. He graduated from the autobody program at South Central College in Mankato in 2006. He is the owner of Mankato Industrial Coatings located in Mankato.

A wedding trip was taken to Jamaican islands.Stores of the past