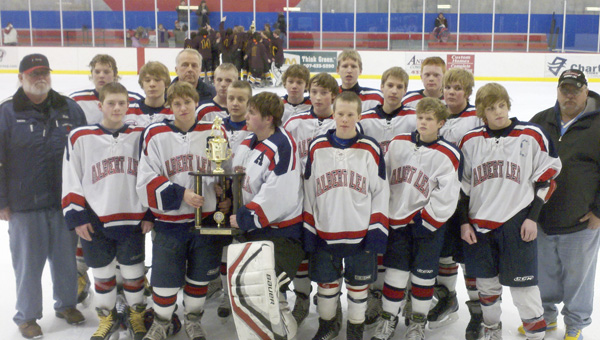 The Albert Lea B Bantams boys’ hockey team holds their 2nd place trophy on Jan. 23 in Austin. The team beat Waseca and Winona before falling to St. Paul Johnson-Como in the championship game. -- Submitted

Play began on Friday evening with the boys seeking revenge for the previous weekend’s one-goal loss to the Waseca Bluejays. In a very evenly matched battle, the Tigers prevailed with a 2-1 victory. Albert Lea’s first goal was scored in the first period by Tatum Miller, assisted by Lewis Kelly. The second goal was by Alec Avery assisted by Ryan Peterson.

In the semifinal game the Tigers played Winona. In another tense, closely contested game, the Tigers scored first with Avery ripping one from the point, assisted by Nate Hogstad. Winona eventually knotted things up at 1-1, and the game was at a stalemate until late in the third period. With 26 seconds remaining, the Tigers coaches called a timeout. The coaches called a play designed to exploit a weakness they had observed during the course of the game. Kelly won the faceoff in the Tigers’ offensive zone. Kelly then pulled the puck back to Cody Rahn, who rifled it diagonally to Avery at the point. With Hogstad creating havoc in front of Winona’s goaltender, Avery blasted a blistering shot that found the back of the net. It was a fitting end to a nicely designed and well-executed play.

In the championship game on Sunday, the Tigers found themselves pitted against a tough St. Paul Johnson-Como Devils team. A fired up group of Tigers came out and gave the Devils all they could handle. The Tigers were first on the scoreboard with Kelly plugging away in front of the net until the puck found its home. Assisting on the goal were Avery and Collin Jahnke. In a seesaw battle Johnson-Como scored next. The Tigers took the lead back on another Kelly goal. Johnson-Como would go on to score the game-winner and add an empty-netter near the end of the game for a 4-2 victory.

Tanner Shaft played brilliantly in the net all weekend for the Tigers, continuously making key saves. The defense cannot be neglected in another outstanding overall team effort.

The B Bantams have achieved an overall record of 29-8-2 and league record of 9-2-0 under the guidance and coaching of Dick Herfindahl, Mark Runden, Robert Peterson and Ross Peterson. The B Bantams are proudly sponsored again this year by the Albert Lea Moose Lodge.