Funeral services for Alice Kycek, 90, of Albert Lea will be held at 1:30 p.m. Wednesday at First Lutheran Church. The Rev. Daniel Baker will officiate. Interment will be at the Greenwood Cemetery, Glenville. Visitation will be from 5 to 7 p.m. Tuesday at Bayview/Freeborn Funeral Home and one hour prior to the service at the church. To sign the guest book, go to www.bayviewfuneral.com. 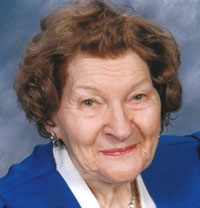 Alice Vomacka Kycek was born on Aug. 12, 1920, to John and Anna (Scabel) Vomacka in Austin. She attended country school through the eighth grade in the Oakland area, and she helped her parents work on the various farms they lived on. Her father told her she worked just as hard as a man did. During WWII Alice and her sister worked at a sewing company making items for the war. On June 25, 1950, Alice was united in marriage to Victor Joseph Kycek at First Lutheran Church. The couple lived on the family farm for a short time in Hayward and then moved to Glenville from 1951 to 1955. They moved to Albert Lea in 1955 and resided there to the present on Wedgewood Road. After Victor’s death, Alice did childcare for various families. She was an active member of First Lutheran Church. Alice was a fantastic artist who had a natural talent for drawing and using watercolors, and also made beautiful embroidery. She was a wonderful homemaker and loved baking all Czech foods.