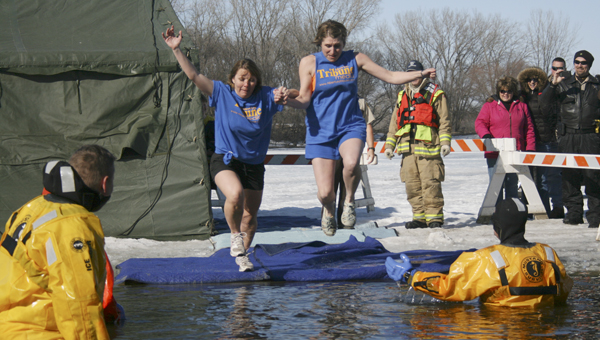 Never in a million years did I imagine myself plunging into icy waters on a 20-degree day.

But that’s exactly what I did Saturday during the polar plunge at The Big Freeze.

And nothing can prepare you for that second when you hit the water.

Before my jump, I waited with a handful of other plungers in a large green tent near the boat dock at Frank Hall Park. A fan was blowing warm air into the tent, but I still had goosebumps. 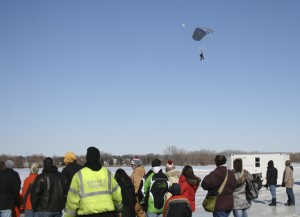 In fact, we were all unsure of what to expect, as we were all first-time plungers. The first three plungers, Alyssa Matson, Abby Stolum and Grace Hutchins, were jumping around and squealing in anticipation. My co-worker, Kathy Johnson, and I didn’t know what to expect, either, so we joined them in the pre-plunge excitement, bouncing around the tent and trying to pump ourselves up for the jump.

This was especially tough for me, as ice activities scare me. I grew up in southern Iowa, where the ponds and rivers don’t freeze up enough to even walk on them. The thought of actually being on top of this body of ice while I waited to jump in was scary. This wasn’t just a new adventure, but overcoming a fear.

“But, why be scared?” I asked myself. The Albert Lea Fire Department had rescuers in diving suits right there in the water and the Albert Lea Medical Center had two ambulances parked nearby. Nothing bad was going to happen to any of us.

Kathy and I watched anxiously as the girls, and then a family of six, took their turns. Now it was our turn.

As we stepped out of the tent onto the platform, wearing T-shirts and shorts over our bathing suits, the air was cold but not overwhelming. It was like when you run to your mailbox in the winter with just a T-shirt and shorts on — it’s quick, but you’re not out there long enough to notice much.

What I did notice was more than 200 people lining the shore to watch us. 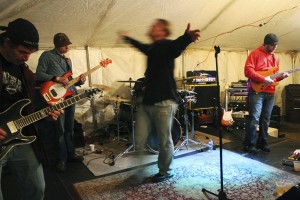 Members of the band Bad Monkey rock the tent at the Big Freeze on Saturday night at Frank Hall Park in Albert Lea. They said it was their first time playing a gig in a tent in the winter. -- Tim Engstrom/Albert Lea Tribune

Walking to the edge of the platform, I felt like I was moving in slow motion. I knew what was coming, but at the same time, I didn’t have a clue. I coaxed and tugged at Kathy, who I thought for a moment was going to make a run for the hills. As we stood at the edge of the platform looking down, we were a little hesitant. Then crowd started to chant, “Jump, jump, jump!”

There was no turning back. On the count of three, we jumped.

The sting of the water up my nose was the first thing that shocked me. Then was the feeling of icy cold — like taking a bath in ice cubes. The water was about five feet deep. I gasped for air as I came up. I felt a tad disoriented and my nerves were seriously confused.

The initial shock of being immersed in the icy cold water was followed by a second shock: the shock of coming out of the water. I had not prepared myself for that, and it was almost worse than going in.

Because the water was actually warmer than the air, I felt two extremes — cold and hot — at the same time. My entire body stung as I ran, drenched and gasping for air, back to the tent.

Trying to get my sweat pants and a dry shirt back on took a few tries because I was so wet and cold, and in such a hurry, I kept fumbling with everything. I just wanted to be warm and dry again.

I heard a couple of men shout out the words “refreshing” and “exhilarating” when they got back in the tent. Most of us, however, just screamed from the shock of the experience.

After a few moments, I regained my composure and left the tent to get my medal.

I’m proud of myself for participating in the event. Anybody can jump into Albert Lea Lake on a warm summer day, but to plunge into 30-degree water on a 20-degree day (with a 10-degree wind chill) isn’t something many people ever actually experience.

Several people have asked me if I’d do it again. I don’t know yet — ask me after my toes have warmed up. Maybe next year, I’ll try the parachuting.

This was the second year for the polar plunge event at The Big Freeze. In addition to bragging rights, the event raises food and money for local charities. More than 80 of us took the plunge on Saturday. I’d also like to tip my hat to Alyssa, Abby and Grace, who collected and donated 140 pounds of food for local charities.