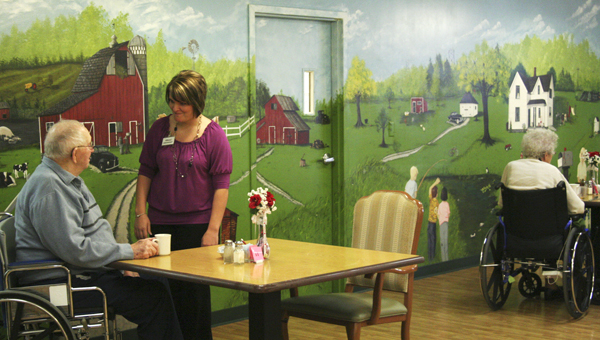 New Richland Care Center Administrator Mikenzi Hebel talks with a resident in the dining room Wednesday. Behind them is the hand-painted mural along the wall that was able to be saved during the floods. -- Michelle Haacke/Albert Lea Tribune

Look for Progress 2011: Everyday Heroes in the Sunday, Feb. 27 edition of the Albert Lea Tribune. Read about dozens of inspirational stories about interesting community members, leaders in faith, rising sports stars, businesses that rock, your amazing neighbors, education standouts, and your all-around heroes in the Sunday Tribune.

NEW RICHLAND — Doris Breid, a resident at the New Richland Care Center, remembers being evacuated from the facility on Sept. 22 as flood waters were invading her home there.

“It was really terrible,” she said. “I had a funny feeling in the ambulance, because you didn’t know where you were gonna land.”

Breid was one of 44 residents evacuated that day and sent to different living facilities throughout the region while the care center underwent a complete transformation, thanks to six inches of water that destroyed nearly all of the flooring and sheet rock throughout the building.

“It was a ton of work, but the residents were so excited to be back — our long hours and extra push to get done were worth it,” said New Richland Care Center Administrator Mikenzi Hebel.

A walk through the center reveals all of their work. The carpet through the entire facility was replaced. Almost every wall was re-sheet rocked from the floor up about two to four feet, depending on how high the water got in certain areas. The wardrobes were torn out of each resident’s room and sanitized to prevent molding. The nurse’s station had to be remodeled and the altar in the chapel had to be completely torn apart, dried out, sanitized and put back together.

“Everybody was most worried about the birds,” said activity director Kathy Flor, pointing to an 8-foot-by-4-foot glass case with oak trim.

Inside, a variety of colorful birds flew about and chirped like they were in the meadow on a sunny, spring day. Around the corner, Hebel pointed out another near miracle.

“That special mural was the only thing not damaged,” she said. “That’s the one thing we were able to keep. It was a blessing in disguise.”

The mural runs from floor to ceiling along the wall between the dining room and the kitchen. Hand-painted by the wife of a resident, the wall depicts a sunny, outdoor scenery including farm animals and ponds. She said the residents had input on the design, and many dug from their childhood memories for ideas when the mural was painted.

After three months of gutting, sanitizing and rebuilding, the care center reopened on Dec. 27. Hebel said nearly all of the residents and employees returned.

Breid was thrilled when she was able to return. A lifelong resident of New Richland, she had landed at the Good Samaritan Society in Albert Lea for three months. While her time there was fine, she missed New Richland.

“I thought about this place a lot,” she said.

Breid’s mother had lived in the New Richland Care Center back in the 1980s, so she felt a special bond with the place. Breid also missed her husband, who still lived in New Richland. He couldn’t visit her every day in Albert Lea, like he had when she lived in New Richland, because snowy weather caused slick driving conditions. The situation was tough on them both.

Like the others, Breid was surprised to see the mural still intact, happy the birds had returned and pleased with the facelift the interior received. But perhaps best of all, she got her old room back.

“We tried to make sure everyone got their old rooms back,” Flor said. “That was important to us, and to them. It really made it really feel like they were all coming back home.”

Look for Progress 2011: Everyday Heroes in the Sunday, Feb. 27 edition of the Albert Lea Tribune. Read about dozens... read more