Clarabell A. Parsons, 92, formerly of Kenyon, died Wednesday, Feb. 2, 2011, at her residence in Apple Valley surrounded by her family. 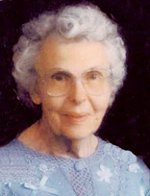 Clarabell was born on April 23, 1918, in Beaver Dam, Wis., to Luella and Hugo Boughton. She graduated from Beaver Dam High School in 1936. Before she married and had a family, she worked at the phone company and attended beautician school and worked as a hairdresser. Clarabell met Ralph Parsons at a dance and they were married on Dec. 23, 1939, in Beaver Dam. They first lived in Duluth, then Brainerd and Beaver Dam before settling in Kenyon in 1949. She and Ralph celebrated 52 years of marriage together. She lived the last eight years with her daughter and family in Apple Valley.

Clarabell was a member of the United Methodist Church Kenyon and was involved in Circle and Ladies Aid. She spent the majority of her time as a homemaker and was always present in the lives of her five children. Clarabell also enjoyed embroidering, playing cards and the company of her cat, Blackie, who often could be found sleeping at the foot of her bed. Family gatherings were always full of laughter and entertaining stories, and she loved being a part of the commotion.

She is survived by her three sons: Tom (and Louise) Parsons of Salt Lake City, Utah, Glen (and Pat) Parsons of Albert Lea and Bill (and Sharon) Parsons of Northfield; her daughter, Elaine (and Mike) Schulz of Apple Valley; nine grandchildren: Dennis, Troy, Tonya, Andreea, Nick, Jay, Josh, Jenny and Jessica; and many great-grandchildren.

In addition to her parents, she is preceded in death by her husband, Ralph Parsons in 1992; her son, Vern Parsons in 2008; brother, Cliff Boughton; and sister, Celia Pfeffer.

We’re grateful for the incredible support of her wonderful friends and neighbors who helped make it possible for her to maintain independent living in the family home in Kenyon for many years.