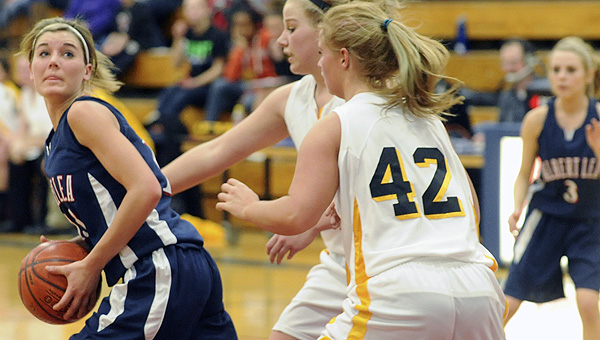 The Cougars’ Mosher ended up shooting 12-of-19 from the field and of her 25 rebounds, 11 of them were offensive rebounds.

The entire Mankato East team was active on the boards. The Cougars pulled down 71 rebounds as a team, while Albert Lea collected 54.

With 71 rebounds, it gave the Cougars plenty of second-chance points that resulted in free throws. Mankato East ended the game shooting 27-of-48 from the free throw line.

The Cougars ran away with the game after the break, going on a 20-4 run midway through the second half to make the lead 97-69.

The Cougars hit the 100-point mark with three minutes and 56 seconds left as Mankato East’s Marta Anderson hit a two-point jumper and pushed the Cougars out to a 100-72 lead.

“It had to be somewhat exciting to watch I hope,” Tigers coach Sean Gillam said. “We really try to put a good product out there from time to time. I cannot stress enough that the effort by the girls was so good in so many different areas. The one thing we really needed to tighten up to win this game was rebounding. Rebounding killed us.”

Along with Mosher, Claire Kiegler scored 20 points on the night for Mankato East.

Abby Connell and Minisha Childress-Frederick both scored 17 points for the Cougars.

Despite the lopsided score, Gillam said the team’s defensive effort and offensive execution were good.

“If you looked at our defense effort and offensive execution it was better — much better. It was just the rebounding thing that we needed to tighten up to make it a closer game.”

Albert Lea plays again at 7:30 p.m. on Tuesday as they play Rochester Mayo at Rochester.