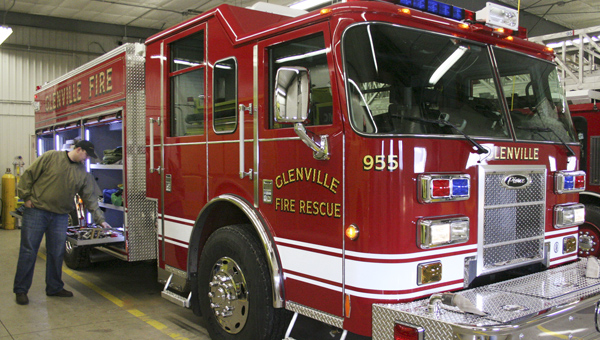 GLENVILLE — As much as firefighters in Glenville would like to use their new pumper truck, it’s probably just as well they haven’t had to yet.

“That means everyone’s safe and there are no worries,” said Matt Webb, assistant fire chief of the Glenville Fire Department.

Members of the Glenville Fire Department brought home their new, shiny, red 2011 rescue pumper truck, on Jan. 28. It was made by Pierce Manufacturing, and they picked it up in Appleton, Wis., a five-hour drive away.

“Five of us took turns driving home — we got an hour apiece,” said Webb, who was as proud as a kid with a shiny new toy.

The new pumper truck replaced a smaller rescue truck in their fleet, and seats six people. With more than twice the equipment storage space as the old truck, it will allow the crew to take out just this one vehicle on most calls, instead of two.

In addition, the new vehicle has a built-in foam system, which allows the department to use less water, a benefit on rural calls when firefighters have to haul water in with the tanker.

LED lights line the inside of the storage units along both sides of the vehicle, which help the firefighters find tools quickly, especially in the dark. A light tower on top containing four 750-watt light bulbs that spins a full 360 degrees can light up a big area at one time.

“Nothing is worst than trying to work in the dark,” said Webb.

According to Glenville Mayor Wes Webb, the city had planned for this new piece of equipment for about five years, and the truck was paid for out of the city’s budget for the fire department.

The department’s fleet also includes a 1989 pumper truck, a tanker, a brush truck and a 1986 aerial platform vehicle that they purchased from the city of St. Paul in 2006. That was the same year the department moved into its new building, attached to Glenville City Hall.

The Glenville Fire Department has 25 volunteer firefighters: 24 men and one woman. Last year, they responded to 105 calls in all, which included car crashes, emergency medical service calls, fires and call-outs to assist other departments in the area.

“The number of calls has steadily gone up each year,” said Webb. “We’ve responded to more traffic accidents, especially on the interstate. There’s no rhyme or reason to it.”

He remembers one time in particular, in December 2009, when the Glenville Fire Department was called to respond to a crash in Interstate 35.

“We ended up assisting with nine wrecks and spent four hours out there,” he said.

He’s proud to be part of such a dedicated crew and said many of the members have been with the department for many years.

“We’re one of the lucky ones, we’ve got a great group and we’re fortunate enough we’re not begging people to join,” he said. “With the new truck, we’ve got all our wishes here.”

Austin lobbies against LGA cuts, too