Gold and green with envy 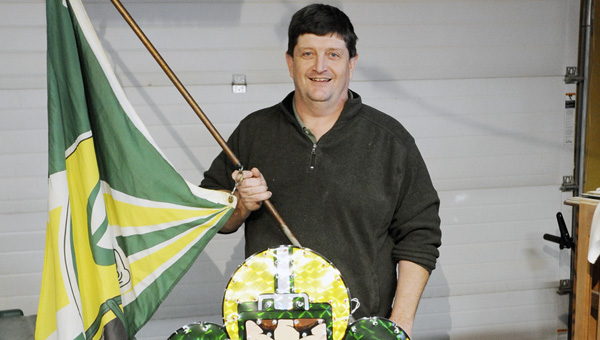 Bill Webb, of Albert Lea, shows off the Packers flag and light-up figurine he puts in his front yards on the days of Packers games. The two pieces of memorabilia are in Webb’s lawn today for the Super Bowl. -- Andrew Dyrdal

His neighbor didn’t have an answer but laughed as he walked into his house.

It’s all part of being a Packers fan in Albert Lea, Webb said, but the friendly verbal exchanges across the street is just the start of it. Whenever the Packers beat the Vikings, Webb’s neighbors quickly shut their blinds.

“If the Packers beat the Vikings my kids and I run up and down the road with a Packers flag,” he said. “My friends say I brainwashed them and well, yes, I’m a Packers fan and that’s the way they grew up.”

But not every Albert Lea household has been as harmonious as Webb’s this football season. Matt Hunley, pastor at Albert Lea Vineyard Church, is a Vikings fan and has had a hard time dealing with the Packers success this season because his wife, Robin, and three daughters bleed green and gold.

“It’s been agony,” Hunley said. “They’re cackling about wins, and hearing that has been a bit frustrating.”

Hunley said his wife and daughters are gathering at his father-in-law’s to watch the game. He won’t be joining them.

“I’m trying to cut myself off from the whole Super Bowl experience,” Hunley said. “Normally I like to watch ESPN but I’ve tried to not watch much in relation to the Super Bowl.”

Hunley said he’s not watching the Super Bowl but is pulling for the Steelers to win.

Webb, an industrial tech teacher at Albert Lea High School, plans on watching the Super Bowl from his cabin in Hayward, Wis., with his son. He grew up in Cheteck, Wis., less than two hours away from the Twin Cities. That fueled his hatred of the Vikings, he said.

“We got the Star Tribune and Pioneer Press and all they had was Vikings coverage,” Webb said.

Webb is also glad the Favre era is likely done in Minnesota.

“I hated it,” Webb said. “He basically wanted to stick it to the Packers by going to the Vikings. It’s like going through an ugly divorce and your best friend starts dating your wife. That friend probably isn’t your friend anymore.”

Webb said he has Favre memorabilia, including prints and jerseys but didn’t wear or display them when Favre played for the Vikings. He didn’t burn them either.

“Someday down the road I probably won’t be mad at Favre anymore,” Webb said. “When he was in Green Bay those were some good times.”

As much as Webb has enjoyed watching the Packers beat the Vikings twice this season and advance to the Super Bowl, he still remembers how he felt last season as the same thing happened to his favorite team.

“It wasn’t good,” he said. “Losing twice to the Vikings and Favre and seeing them go one play away from the Super Bowl hurt.”

As far as tonight’s game goes, Webb is confident the Packers will win.

“I wouldn’t bet my life on it, but I like their chances because it’s indoors in a controlled environment.

“Pittsburgh will get to Rogers a couple of times but Rodgers will make some big plays, too.”

He also hopes the Packers win for his mom, a diehard fan who passed away in the fall and didn’t get to see much of the season.

“I really feel bad because she never got the chance to see this Super Bowl,” Webb said. “I’m sure she’s watching just in a different place.”

Webb noted that his mom hated Favre more than he does.