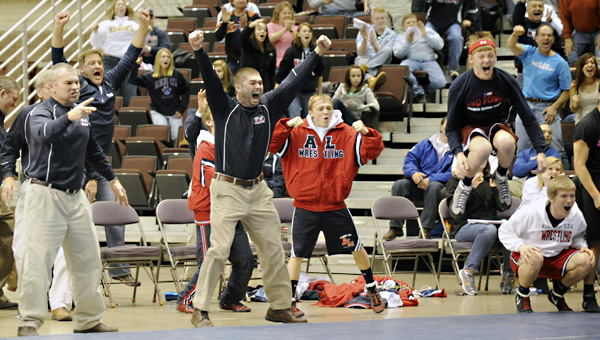 ROCHESTER — The Albert Lea wrestling team is as tight as the black brace that supports Carter Kortan’s torn up knee.

So tight that less than one month after tearing the ACL in his right knee, Carter took the mat Saturday and grimaced through the greatest loss of his career. After having not wrestled since Jan. 20, the 171-pound senior lifted his team with an inspiring 7-2 defeat to Owatonna’s Ben Zeman, holding the Huskies at bay and allowing his twin brother Conner to clinch a state tournament berth the very next match.

Zeman built a 6-0 lead going into the third period as Carter was limited to wrestling defensively. Midway 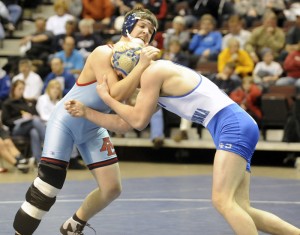 through the last period, though, he scored a dramatic takedown right in front of the Albert Lea fans, who jumped out of their seats and let out their largest roar of the match.

When the final whistle blew, Tigers assistant coach Brian Goodnature lifted his hands into the air, repeatedly asking for a standing ovation — and Carter got it.

“He wanted to wrestle because he wanted his team to go to the state tournament,” Tigers coach Larry Goodnature said. “It helped the other kids, too. If they see one of their teammates go through what he’s gone through and then go out there and wrestle, they think ‘Man, that’s unbelievable.'”

Carter’s loss pulled the No. 6-ranked Huskies within 25-15 heading into the 189-pound match between his brother Conner Kortan and Owatonna’s Coyte Kuefner.

The already meaningful match was intensified because of the two wrestlers’ fiery history. After Conner beat 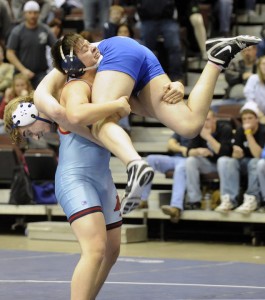 Keufner 7-5 in the final seconds on Jan. 13, Kuefner head-butted Conner in frustration and received a one-point team penalty. There were no head butts thrown Saturday but Kuefner did receive a warning and then a one-point penalty for putting Conner’s head into a scissor hold.

Conner knew he’d be coming after him.

“I just stayed calm,” he said. “I let him do all the talking. I thought if I stay calm I’ll win.”

After tying 4-4 in regulation, Conner and Kuefner entered overtime when Conner lifted Kuefner and slammed him for a two-point takedown, sealing the Section 1AAA championship and state tournament berth for the No. 4-ranked Tigers.

“That was unbelievably awesome,” Larry Goodnature said. “I mean it was so good.”

Conner said he nearly got sick before his match, as he nervously paced back-and-forth beside the mat and hoped his brother Carter didn’t further injure himself. All Carter did was inspire him.

“He kept it to a decision and that got me fired up,” Conner said. “I thought ‘I can put this away and I’m going to.’”

Conner’s win gave the Tigers a match-sealing 28-15 lead before the Huskies won two decisions to make it a 28-21 final.

“When Carter did his job I was hoping Conner would do his,” the brothers’ dad, Jack Kortan, said. “Words can’t describe how proud of them I am. They battled.”

Carter said he wasn’t going to wrestle unless the Tigers got off to a fast start, and thanks to the team’s other set of twins, Dakota and Garrett Wangsness, he didn’t have a choice.

Dakota made quick work of the Huskies’ 103-pounder Brenden Buryska, building a 7-0 lead before pinning him 12 seconds into the second period. The fall gave the Tigers a 6-0 advantage and set the stage for sophomore Garrett and No. 3-ranked senior Nick Scheffert.

Unranked Garrett and the defending state runner-up Scheffert battled through three grueling periods, tied 2-2 at the 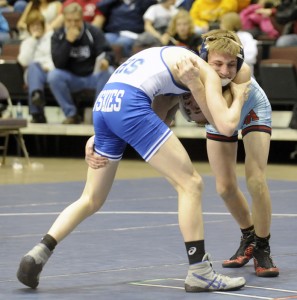 end of the first and second, and 3-3 at the end of the third. After a scoreless first overtime, both wrestlers earned one-point escapes in the second before Garrett won with a takedown as time expired in the third overtime. Scheffert knelt with his head between his knees for a moment while Garrett celebrated.

“I had nothing to lose,” Garrett, who also beat Scheffert last season. “I thought ‘I’ll just wrestle my hardest and see what happens.’ I wrestled amazing before and I didn’t know if I could do it again.”

After the Tigers’ Lucas Hansen lost a hard-fought battle to No. 4-ranked Evan Green 4-3 at 119 pounds, Devin Nelson pulled a stunning upset of the Huskies’ No. 9-ranked Scott Summer.

In another battle of youth versus experience, the eighth-grader Nelson outworked the senior Summer and built a 5-2 lead entering the third period with two takedowns and an escape. Another takedown in the third gave Nelson a 7-2 lead before a late escape by Summer made it a 7-3 final.

Trailing 12-3 after the first four matches, the Huskies tied the match at 12-12 as Ben Anderson, Bowen Schultz and Adam Kubat picked up decisions at 130 through 140 pounds. No. 5-ranked Trey Hable put the Tigers ahead for good, though, winning a 9-5 decision over 145-pounder Matt Dinse.

With the Tigers leading 15-12, No. 2-ranked 152-pounder Dalton Westerlund had an opportunity for a six-point fall against the Huskies’ Michael Katte. Westerlund led 5-1 after the first period and 7-1 entering the third but struggled getting both of Katte’s shoulders onto the mat. With 55 seconds left in the match, he finally did and gave the Tigers a 21-12 lead.

At 160 pounds, No. 3 Cory Hansen jumped out to a 7-0 lead over the Huskies’ Justin Duruji and led 8-1 with 30 seconds left in the match. Looking for a four-point major decision, Hansen picked up another point late to win 9-1 and extend the Tigers’ lead to 25-12.

At 171 pounds, Carter Kortan battled to a 7-3 defeat before his brother clinched the championship.

The Tigers’ Caleb Gaudian and Alex Nielsen lost decisions at 215 pounds and heavyweight, respectively, against ranked opponents to end the match.

The unlikely season sweep of Owatonna and state tournament berth embodied the never-give-up attitude the Tigers have wrestled with all season.

“These kids have surprised me all year,” Goodnature said. “We had 10 guys quit this team but the guys that stuck it out had work ethic and were dedicated to Albert Lea wrestling. They deserved everything they got this year. It is just amazing how everytime we wrestled they came with so much heart and it was just as impressive today. They weren’t going to be denied.”

Goodnature admitted that after looking at his team’s schedule before the season he didn’t expect to be 27-3 and in the state tournament. On Saturday, he said this is one of the top teams he has ever coached.

“Being the underdogs didn’t bother us the whole year and it didn’t today,” Goodnature said. “It’s all about believing in yourself and having confidence, and they have it right now and they’ve had it all year. There’s no quit in them. They have all kinds of heart.”

The Tigers wrestlers will compete again Friday and Saturday in the Section 1AAA individual tournament at the Mayo Civic Center in Rochester. Class AAA state tournament seeding will begin this week and the Tigers team will wrestle that in that tournament starting at 11 a.m. March 3.