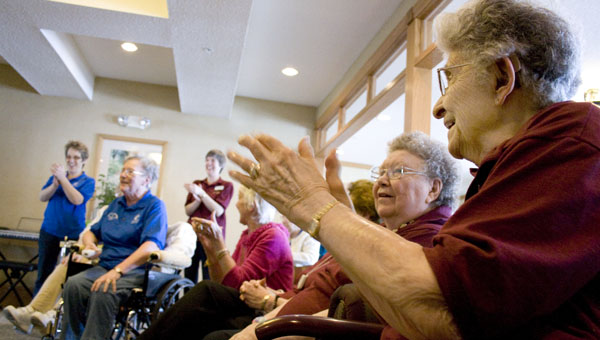 Once a month for the past few months, residents from two local senior facilities have been facing off in a friendly competition that is not only rejuvenating their minds and bodies, but also their spirits.

One month the women meet at St. John’s; the next, they meet at Oak Park Place.

The women, decked out in bowling shirts with their home facility and team name, take turns bowling — two per game for each team.

“The ladies have so much fun doing this,” said Sue Barnes, an activities coordinator at St. John’s. “It gives them an opportunity to get around the community with people they used to know. They look forward to it all month.”

This past Friday, things were no different.

After cold weather canceled January’s competition, the women from St. John’s bundled up and traveled across town to Oak Park Place Friday for their monthly competition.

Some stood as they took their turn to bowl; others stayed seated in their wheelchairs.

Each time a teammate scored a spare or a strike, the other women rang out in cheers and started clapping.

On the other hand, when things didn’t quite go their way, they responded in the opposing manner.

At the end of each game, scores were tabulated, and two additional people came on for each team.

After every person played, a traveling trophy was presented to the Gutter Grannies for having the highest points.

So far, the trophy has only gone to St. John’s, but activities coordinators at both facilities — the coaches — said the games are close.

Oak Park Place activities coordinator Cindy Bodensteiner and Barnes said playing bowling on the Nintendo Wii is much different than playing bowling with real pins and balls, but it gives the residents the opportunity to play despite physical limitations.

“I enjoy bowling,” said Oak Park Place resident Ruth Berg. “It gives me something to do.”

“I enjoy the camaraderie with the other girls,” added St. John’s resident Marlys Johnson.

For many of the women, it’s also an opportunity to take part in a hobby they used to be involved in when they were younger.

On Friday, she scored strike after strike during her bowling game.

O’Neal said for her the game is a chance to get a little bit of exercise and to help her keep busy.

“And to be with the girls,” she added.