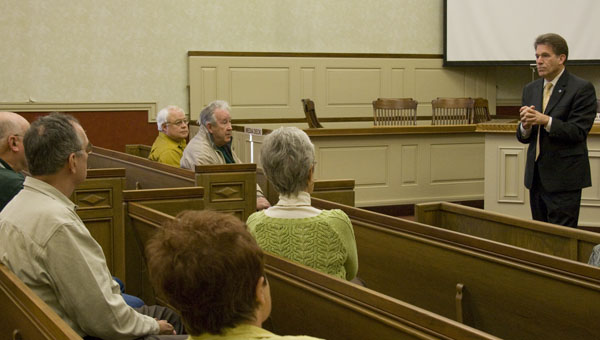 Minnesota Secretary of State Mark Ritchie speaks to a small group of people Monday in the Freeborn County Board of Commissioners room about election concerns. -- Sarah Stultz/Albert Lea Tribune

Though it will be another year until the next major general election, Minnesota Secretary of State Mark Ritchie is working ahead to seek out what can be done to improve the state’s election system.

During a visit in Albert Lea on Monday, Ritchie met with almost a dozen election judges, officials and residents at the Freeborn County Courthouse to hear what things went well in the recent general election and what things may still be a struggle.

He said he’s trying to get ideas and suggestions to take back to the Legislature.

“The suggestions made after ’08 that got implemented made a huge difference,” he said.

He noted that the state just completed another record-breaking election with almost 3 million people voting. The governor’s race of Republican Tom Emmer against Democrat Mark Dayton ended in a recount, along with two other recounts for state offices, including the District 27A race, which covers Freeborn County.

Ritchie said most Minnesota residents are civic-minded and are connected to the election process.

Even so, there are still several things that can be done to improve, he said.

The group talked about whether moving the primary earlier and granting more time for absentee voting has made a difference.

Ritchie said there has been an increase in participation since this law went into effect.

Freeborn County Auditor-Treasurer Dennis Distad said he doesn’t think there would be one election judge in Freeborn County that disagreed with this change.

“I think we haven’t taken seriously the level of stress this had been creating and then the recount on top of it,” Ritchie said.

People in attendance also talked about proposals to require voter ID at the time of voting and how to avoid illegal voting — by felons and non citizens — as well.

Distad said during the 2010 general election Freeborn County had one convicted felon who voted. This person has since been charged with a new felony for doing so.

Distad also pointed out that in Freeborn County there were 800 or 900 people who registered to vote the day of the election.

Ritchie said the bulk of those people had a change of address and had to re-register.

He and the other officials also talked about how to encourage young people to participate in the election process, eventually training to become election judges.

“If you think of any opportunities to get more young people, I want to get people to do it,” he added. “We need to do things for many reasons to get our young people on.”

He noted he’s planning to attend a social studies teachers association conference where he is going to encourage these teachers to promote these ideas to their students.

Ritchie’s visit is one of several he’s making around the state.

On Monday he also stopped in Rochester to talk to officials there.