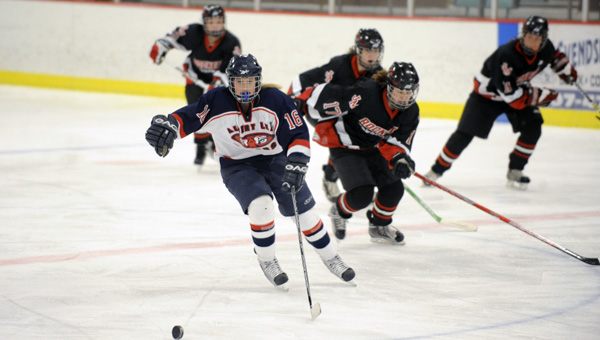 Albert Lea's Megan Pulley (16) chases down the puck Thursday at City Arena. The Tigers are seeded fourth in the upcoming Section 1A tournament.

The Albert Lea Tigers girls’ hockey team was seeded fourth Sunday for the upcoming Section 1A tournament. The Tigers will play the fifth-seeded New Prague Trojans at 7 p.m. Friday at City Arena.

The Tigers lost to the Trojans 3-2 in overtime on Nov. 18 in New Prague.

“I’m a little surprised that we ended up as the No. 4 seed but knew that was a possibility depending on how the other section coaches decided to cast their seeding votes,” Tigers head coach Paul Willet said. “I’ve been telling our team that we’re going to have to play three very difficult games to get through this section, and that would hold true regardless of where we were seeded.”The Tigers had the third best Section 1A regular season record this season at 3-3-2.

The winner of the Tigers-Trojans matchup will play Red Wing at the Four Seasons Centre in Owatonna on Feb. 15. The Tigers lost to Red Wing, who have a bye in the first round, 2-1 on Dec. 18 at home.

“We’re excited to play New Prague,” Willet said. “It should be a great game. They beat us in overtime back in November, but I feel like we have improved a great deal over the course of the season. We play much better as a team and have really learned how to play away from the puck and in the defensive zone. Even though New Prague has had a tough second half of the season, they are very dangerous.”

On the opposite side of the bracket, No. 2 Northfield host No. 7 Waseca and No. 3 Faribault hosts No. 6 Austin.

The Tigers lost at Northfield 2-1 on Nov. 16, won at Faribault 2-1 in overtime on Nov. 26 and beat and tied Austin this season in a two-game series.