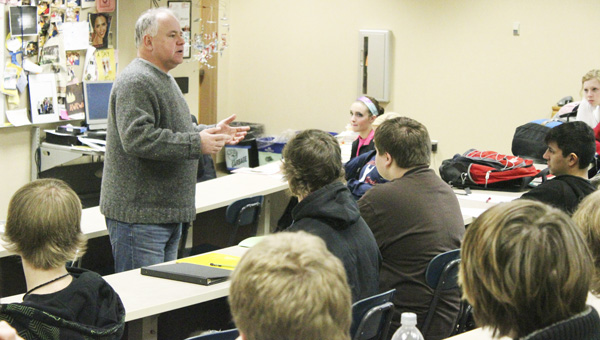 Seniors at Albert Lea High School got a rare chance to talk directly to one of their representatives in Congress Wednesday morning.

U.S. House Rep. Tim Walz spoke to government and economics students and gave them the opportunity to ask questions. Teacher Steve Cunningham contacted Walz and said Walz had spoken to students at ALHS before.

“I’ve known him for a long time,” Cunningham said.

“My passion is in the classroom,” Walz said. “They had great questions.”

Walz said he likes to speak with high-schoolers so they understand that representatives are representing them, and he wants to show them that he’s accesible.

“The things I’m voting on will affect them more than they’ll affect me,” Walz said.

He said he hoped students would go home and talk to their parents and start a conversation about politics, even if they don’t agree with him.

Walz explained to the students how politically diverse the district he represents is. He said he has to represent about 650,000 people, with about half of those people who didn’t vote for him.

“I don’t represent just who voted for me,” Walz said.

He said he tries hard to work with everyone in Congress, which can be hard because not everyone will compromise. Walz said he fully embraces others’ opinions.

“We can’t get to the point where people can’t approach us,” Walz said.

He did admit to being nervous for his children at political functions, and mentioned his sadness of the 9-year-old Christina-Taylor Green, who he said just wanted to meet her congresswoman.

Another student asked what Walz was doing for military veterans. Walz said he’s a member of the committee on veterans’ affairs, which he said he wishes were more popular among members of Congress.

“We have a moral responsibility to do everything we can for them,” Walz said.

He said he’s worried about the unemployment rate for returning veterans and said he’s focusing on health care, education and jobs for veterans.

Samantha Hutchins, a senior, asked Walz what he’s doing to help those in the agriculture field. He said he’s worried about helping younger people get into agriculture.

“I want to strengthen crop insurance — that helps all of us,” Walz said.

Walz also said he was concerned about conservation, which affects more people than just the farmers. Hutchins said she asked Walz about agriculture because her family is involved in agriculture and she was curious about what he’s trying to do for farming.

Students also asked Walz what he thought of President Barack Obama, Speaker John Boehner and tea party members. Walz said he likes Obama’s vision of collaboration. He said although Boehner is politically different from him, he thinks they can get along.

Walz said he’s not worried about tea party members because they were democratically elected to represent their districts. He does worry that some are ideologically pure and think of things only in terms of black and white.

“I consider myself fairly patriotic,” Walz said. “I will compromise for the greater good.”