U12 girls’ hockey qualifies for district 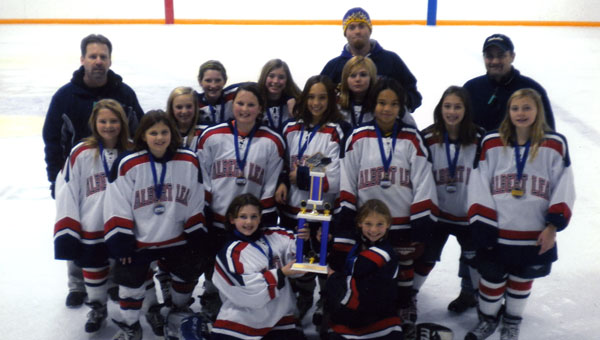 The U12 girls’ hockey team poses for a photo with their coaches. -- Submitted photo

The Albert Lea U12 girls’ hockey team has qualified for the district tournament as a No. 2 seed in District 9. The tournament will take place in New Ulm during the weekend of Feb. 18. The team finished league play in second place with a record of 8-5-1.

The team also participated in four tournaments this season. They had their most success at the Waseca tournament. The first game Albert Lea faced host Waseca and ended in a 4-4 tie. Hannah Savelkoul scored all four goals putting her on pace for more than 50 goals this season. The next opponent was the LeSueur Bulldogs and Albert Lea came out with an 11-0 victory.  Sky Anderson was in net for the shutout and received a lot of help from her defensive partner Riley Hanson. Maddy Funk showed how much she has improved by recording her first two career goals in the victory. Albert Lea faced Red Wing in the championship game but lost 4-3.  It was a good game for Albert Lea defensive player Lexxy Gordon, holding the fast skating Red Wing team to 15 shots on goal.

In other tournament action the team faced South Saint Paul in Mankato, and came out with a 7-0 victory. Hard work at practice paid off for Abby Sencio when she fired a shot from her defensive position at the blue line past the opposing goalie to record her first career goal. Most recently, the girls traveled to Eden Prairie for a tournament where they defeated the host team 4-1.

In regular season play, the team suffered one of its toughest losses to league-leading Mankato, though first year player Skylar Abrego came through with her first career goal. The team traveled to LeSueur for a makeup game during the Christmas break and with a three-goal game, Maddy Carstens secured the win for her team. Lyrik Blake-Domke played a strong game controlling the puck at her center position and as a play maker recorded three assists.

Haley Larson has had a great season anchoring the defense with her ability to shut down opposing players and use her speed to carry the puck from defensive to offensive zones, setting up her team mates for many scoring chances.

Adison Malakowsky took on the role of backup goalie this season, and recorded he first win with an 11-4 victory over St. Peter. Hannah Johnson led the scoring with a break away goal and two rebound goals to get her three-goal hat trick.

In the final home game of the season the team faced Waseca on Albert Lea hockey day. Albert Lea had a 4-1 lead going into the third period, but Waseca fought back with two goals to make the game much closer than the coaches would have liked. Maddi Herrera earned player of the game honors as she pressured the opposing players into many turnovers, creating three break aways and turning one into the eventual game winning goal. Thanks to the Albert Lea youth boys hockey players for cheering on the girls during the game.

Even though the team has many young players, they have shown maturity and team work that has paid off with the second place finish in district play. The team would like to thank their fans, friends and family members for their support on making this a successful season. This is the last U12 season for Savelkoul, Larson, Sencio and Gordon. The team is coached by Ed Pomerson, and he is assisted by Zach Gordon, Don Savelkoul, Mike Gordon and Mike Carstens.