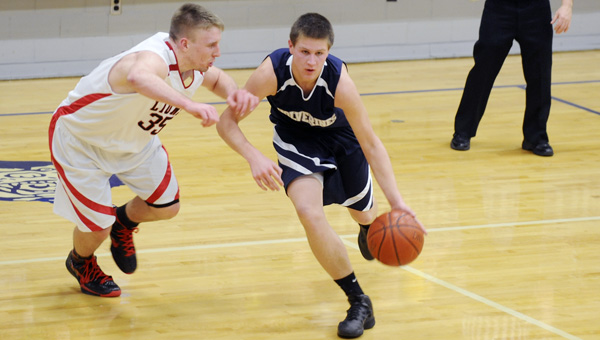 Glenville-Emmons’ Andrew Lau dribbles the ball Friday during the first half against Spring Grove. -- Andrew Dyrdal

Dempewolf made a buzzer-beating 3-pointer before halftime to give the Wolverines (15-1, 11-1 Southeast) a 37-17 lead at the break before knocking down another to open the second half.

Landon Hall added another three 3-pointers for the Wolverines, who shot 10-of-18 as a team from behind the arc.

The game was the Wolverines’ first since Hope Lutheran snapped their 14-game winning streak to start the season on Jan. 28.

“We needed a big bounce back after last week,” Wolverines head coach Dan Fredrickson said. “We didn’t play with a purpose last Friday and we reinforced all week that we need to show up with purpose and passion. I thought the guys did that tonight.”

Tyler Woodside scored the game’s opening basket on a turnaround jump shot and had 10 of the Wolverines’ first 23 points.

Leading 25-9, with just under eight minutes left to play in the first half, the Wolverines went off from the 3-point line.

Hall and Dempewolf each made two 3-pointers as the Wolverines scored their final 12 points from behind the arc.

With 5.9 seconds left in the half, the Wolverines inbounded the ball from half court but Wyatt Madsen was trapped near the Lions’ bench. Madsen found Dempewolf at the top of the key, who flipped the ball up without enough time for a normal release. The shot rattled in for three points and the Wolverines celebrated on their way into the locker room with a 20-point halftime lead.

“I’m proud of the way we really took the game to them in the first half,” Fredrickson said. “We came ready to play and took the fight to them.”

The second half began just as the first half ended.

On the Wolverines’ first possession out of the break, Dempewolf knocked down his fifth 3-pointer of the game from the top of the key. On the following defensive possession, he picked the pocket of a Lions’ ball handler and score an uncontested layup to give the Wolverines their biggest lead of the game at 42-17.

“He was huge,” Fredrickson said of Dempewolf. “The kid has played big in big games.”

But the Lions (11-8, 9-3) fought back. Sophomore Blaine Storlie hit a 3-pointer and junior Aric Elton made a layup to quickly pull the Lions back within 20. Then Storlie stole the ball from Hall and scored a fastbreak layup to pull within 42-24.

But the Lions didn’t do enough offensively with a strong defensive showing to start the second half. The Lions forced five consecutive turnovers and held the Wolverines without a field goal for over six minutes but scored just six points during that stretch.

Woodside made the front end of two free throws to end the Wolverines’ scoreless streak and hit a 5-foot jumpshot on the following possession to end their field goal drought.

Elton penetrated and scored a layup but Dempewolf answered with his sixth 3-pointer of the game with 9 1/2 minutes to play.

The Lions pulled within 13 points at 54-39 and called a timeout with 3:49 left in the game but didn’t get any closer.

Hall made his third 3-pointer of the game out of the timeout from the baseline and the Wolverines outscored the Lions 12-6 over the game’s final three minutes. Lau added seven points during that span with a fastbreak dunk, 3-pointer and two free throws.

The win completes the Wolverines’ season sweep of the Lions and keeps them in sole possession of first place in the Southeast Conference with seven conference games left to play.

“We wanted to put these guys to bed,” Fredrickson said of the Lions. “With two wins against them we’ve basically put them out of contention. We’re really proud of that.”

With the win, the Wolverines were also able to put last Friday’s shocking three-point loss to Hope Lutheran behind them.

“They’re pride was damaged a little bit,” Fredrickson said, of his players following their first loss. “That loss really affected them. We spent the week building them back up and letting them know the most important game we play is the next game.

Elton led the Lions with 23 points.