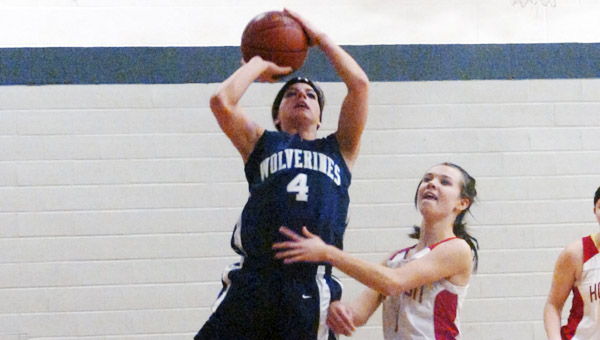 Glenvill-Emmons' Alayna Hall shoots Friday during the first half against Houston in Glenville.

GLENVILLE — The Glenville-Emmons Wolverines girls’ basketball team opened an 18-2 lead Friday against the Houston Hurricanes and won 58-38 in Glenville.

Kalli Van Ryswyk and Alayna Hall combined for 12 of the Wolverines’ first 18 points. Van Ryswyk finished with 10 in the first half.

Kailey Davis and Emily Belshan each made two 3-pointers in the half’s final five minutes, and the Wolverines (16-5, 14-4) led 34-16 at the break. Davis and Belshan each finished with three 3-pointers for the game.

Wolverines coach Lisa Ziebell played a lot of girls during the second half as G-E outscored the Tigers by two after the break.