The people of Albert Lea enjoy their rivalries. There’s the Minnesota Vikings and the Green Bay Packers. The Albert Lea Tigers and the Austin Packers. Even St. John’s versus Oak Park Place in bowling on “Wii Sports.”

Any list of local rivalries surely includes the one between the Noon Kiwanis Club and the Daybreakers Kiwanis Club. They rib each other when it comes to fundraising and club status, but the big challenge between the two is the annual Freeborn County Bike-A-Thon, which benefits the American Cancer Society.

We asked each of the presidents of the two clubs, Lois Ahern and Paul Troe, to share their views on the Bike-A-Thon rivalry. 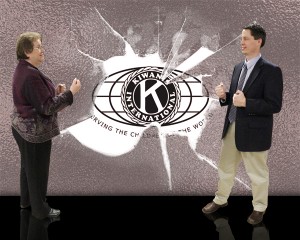 “Two local Kiwanis Clubs have fostered a good-natured rivalry over the years in support of the annual American Cancer Society Bike-A-Thon. The Albert Lea Daybreakers and the Albert Lea Noon Kiwanis Clubs have been longtime supporters of the Bike-A-Thon, the annual 100 mile bike ride around Freeborn County that is the longest running fundraiser in southern Minnesota for ACS. Members of both clubs know someone who has been affected by cancer or are a cancer survivors themselves. That knowledge and experience is what motivates the members to keep this rivalry alive.

“The clubs challenge each other to raise the most money and also field a team of riders for the event. The rivalry goes back at least 10 years and usually starts when Kent Erlandson from the Noon Club visits the Daybreakers to issue the annual challenge and distribute pledge forms.

“And later at least one Daybreaker will make a return visit to the Noon Club to stir up the competition. Though an exact figure for funds raised is not available, the Daybreakers have won the challenge seven of the past 10 years and proudly display the traveling trophy to prove it! Get those legs in shape for the ride and let the fundraising and fun begin!”

“For many years, the Albert Lea Noon Kiwanis Club has been coordinating a sub-division of the Freeborn County Bike-A-Thon, where teams from various service clubs, businesses, churches and other organizations ride together from Albert Lea to Glenville to raise money for the American Cancer Society. This is a short-distance alternative for those wishing to participate in the Bike-A-Thon but don’t wish to ride the whole 100 miles. Each year, a traveling trophy is awarded to the team that raises the most money.

“Although several teams have been participating in this event, a friendly rivalry has developed between the Noon Club and Daybreakers Club over the past several years as to which club will raise the most money. I believe this rivalry has motivated more club members to participate in the event, resulting in more revenue raised. This event is a fun way to socialize with other team members while raising money for the American Cancer Society. Anyone interested in joining or starting a team, please contact Kent Erlandson at 507-383-1840.”

About the Bike-A-Thon
The 2011 Freeborn County Bike-A-Thon takes place on May 8. It is the longest running American Cancer Society benefit in Minnesota.
Riders collect pledges prior to the ride, then gather at 6 a.m. that day at the warming house at Sibley Elementary School at the corner of Front Street and Maplehill Road.
The route goes down County Road 18 and over on County 13 to Glenville. Some riders end their journey there, while others continue on the full 100-mile route to Myrtle, Hayward, Geneva, Hartland, Freeborn, Alden and Conger before returning to the finish at the Sibley warming house again in Albert Lea.