Base of operations: Independence Avenue in Clarks Grove 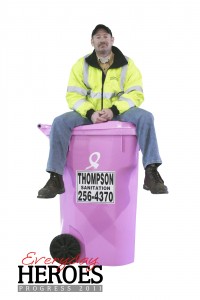 Frank Thompson poses for a photo on top of one of the pink garbage cans he has been selling. -- Photo by Kelli Lageson/Cutout by Stacey Bahr

Kryptonite: weather and heavy snows affecting how fast customers can be served

Origin: Thompson has owned Thompson Sanitation since 1995. His father started the business in 1982. When Thompson took over he expanded the area of coverage and is continuing to add new customers. He said he loves that he’s never bored at his job and likes the flexibility. He gets to wear many hats by being a salesman, mechanic, truck driver and while filling in for employees.

Thompson recently found pink garbage bins through a distributor and approached Vicki Manges, chairwoman for Freeborn County Relay for Life, about using them at the event. The bins were also put on the silent auction at the event. Other customers of his who request them make a donation to the Relay for Life to receive the bins. Manges said Thompson showed good business and community support by making the bins available to those who wanted them.

“Seeing support all year round gives volunteers and businesses a little more to be proud about. He provides garbage service every year for the Relay, and we really appreciate the support we get from him.” — Vicki Manges, chairwoman for Freeborn County Relay for Life

“Honestly, he’s one of the best people I’ve ever worked for. As a small business owner if you need something and he can accomodate it, he will.” — Laura Becker, Thompson Sanitation office assistant

“Frank is caring, compassionate and committed to using the resources of his business to make a positive difference.” — Barb Reed, Thompson Sanitation office manager

“He’s a good guy; I’ve worked for him for 10 years. He helps a lot of people.” — Steve Thisius, Thompson Sanitation employee

“I think he’s a really caring boss who wants to make sure his employees are well-taken care of.” — Will Harmon, Thomson Sanitation employee