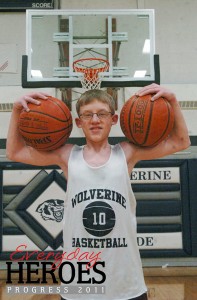 On a talented Glenville-Emmons team, Johnson usually is the second to last person to come off the Wolverines bench.

So while he doesn’t play a significant role on the floor during games, he aims to make his impact off the court.

During games, Johnson says he tries to inspire his teammates and help motivate them.

“Inspiration,” Johnson said of his role. “I help lift up the team if their spirits are down. I also will try and help out if I see them doing something wrong.”

Johnson usually pushes his teammates in practice to get better and brings a positive attitude when things aren’t going well for his teammates.

“He’s always positive,” Glenville-Emmons head coach Dan Fredrickson said. “When we break off into our groups for practice he is always encouraging his teammates to get better and to do their best.”

Along with his positive attitude and pushing his teammates, Fredrickson says Johnson also has a good basketball IQ.

“He’s got a good basketball mind,” Fredrickson said. “He knows the rotations in our zones, and he knows our offense and that type of stuff. He’s a smart kid.”

While Johnson inspires his teammates, they also inspire him.

Johnson wasn’t sure about going out for basketball this season, but his teammates came to him and convinced him to stick with it for his senior season.

Fredrickson says he is happy that he has gotten to know Johnson and is proud of him for staying on the team since junior high.

“Collin’s a great kid,” Fredrickson said. “It’s been fun to get to know him over the years. The one thing I like about him is his perseverance. Collin has really stuck with it. I’m really proud of him for sticking with the program and being part of the team and part of this basketball experience.”