In a press release issued this morning, the commissioners stated they want to form a good working relationship with the new sheriff. 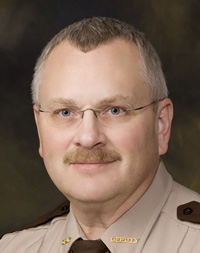 Mower County District Court Judge Donald Rysavy handed down his ruling Thursday. It stated that Kindler failed to establish that the commissioners were “arbitrary, capricious or oppressive and/or failed to take into account the responsibilities and duties of the office and the experience, qualifications and performance.”

A factor in the ruling was that Kindler had never served as sheriff before.

“I’m a bit disappointed in the ruling, but I’m happy that the process worked the way it was suppose to,” said Kindler. “I look forward to getting back to focusing on the duties of sheriff.”

“I thought we went through the correct process in setting it, and I’m glad the judge agreed,” said Glen Mathiason, District 1 commissioner.

Kindler, who defeated incumbent Mark Harig in November 2010, appealed his $75,000 salary for 2011, which county commissioners set in December, a month and a half after he had been elected. That pay rate represents a 9.25 percent reduction from Kindler’s base salary for 2010, when he was the detective supervisor in the Sheriff’s Office and an overall salary reduction of more than 15 percent when overtime is added.

In previous stories, Kindler has said the responsibilities and duties of the sheriff were greater than his previous position as a detective supervisor.

In January 2010, Freeborn County commissioners set a minimum salary of $62,000 for the position of sheriff.

The hearing took place Feb. 24 at the Freeborn County Courthouse. The case was heard by Rysavy in Albert Lea, after Freeborn County District Court Judges Steven Schwab and John Chesterman formally recused themselves from the case.

Commissioners said the salary level was based largely on historical precedent. According to Scott Lepak, the county’s lawyer, the county board was required to look at the duties and responsibilities of the sheriff, along with his experience and qualifications.

They also stated Kindler’s education was taken into account, as well as salaries of county officials in neighboring counties and in counties the same size as Freeborn County across the state.

Kindler represented himself and called Freeborn County Commissioners Dan Belshan, Christopher Shoff and Glen Mathiason to the stand during the hearing, along with Freeborn County Administrator John Kluever.