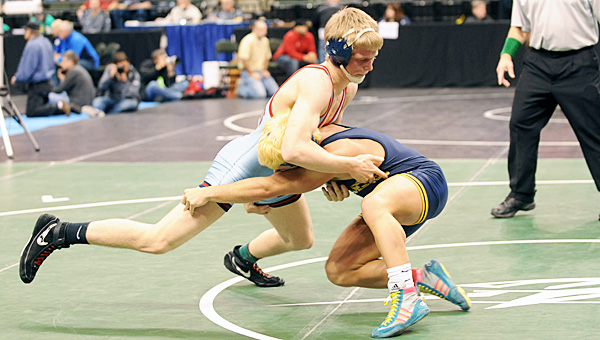 Albert Lea 145-pounder Dalton Westerlund fights off Prior Lake's Tanner Carlisle Friday in the quarterfinals of the Class AAA state individual tournament at the Xcel Energy Center in St. Paul.

ST. PAUL — Dalton Westerlund cut weight in February to have a better shot at a state title. He moved two steps closer to that goal Friday with two wins in state tournament.

Westerlund, who recently moved from 152 to 145 pounds, was the only Tigers wrestler to stay undefeated Friday in Day 1 of the Class AAA state individual tournament at the Xcel Energy Center in St. Paul.

After winning a major decision in the first round, Westerlund beat No. 3-ranked Tanner Carlisle, of Prior Lake, avenging an early-season loss to the wrestler.

But Westerlund wasn’t out of the water, yet.

Carlisle is an aggressive wrestler with an excellent high crotch takedown move — Westerlund had to keep him without one for 90 seconds. After a stoppage in the match with 1:06 left, Carlisle started in the down position hoping to earn and escape and takedown to win. Westerlund had three mat returns before Carlisle finally earned an escape with 10 seconds left to pull within 3-2 but didn’t get any closer.

“That was a great, smart match,” Tigers coach Larry Goodnature said. “It was a big win.”

Westerlund lost to Carlisle in a high-scoring match on Dec. 4 and knew he had to keep it closer this time to win.

“In the beginning of the year he took me down right away,” Westerlund said. “I knew that if I kept it close in the first period I could pull away at the end.”

Carlisle almost scored on a high-crotch takedown in the first but Westerlund scrambled out of it. That was the difference in the match but he also said he’s in much better condition now then he was at the beginning of the year — something he’ll have to rely on as he enters a semifinals matchup against No. 1 Zach Rohr, of Hastings.

“I cut weight for a chance to win state,” Westerlund said. “I want the whole thing.”

Westerlund was one of five Tigers wrestlers in the state semifinals but the only to advance further. Dakota Wangsness (103 pounds), Caleb Kolodge (140), Trey Hable (152) and Cory Hansen (160) all lost their second match of the day.

After beating Nathan Stebbins, St. Paul North, 9-4 in the first round, Wangsness ran into Apple Valley’s Seth Gross, the No. 2-ranked wrestler at 103 pounds. Gross beat Wangsness 9-1 sending him into the wrestlebacks for a shot at third place. Wangsness then beat Willmar’s Nate Mittag 5-2 to move into the consolation quarterfinals.

Kolodge bested North St. Paul’s Joe Raymond 4-1 in the quarterfinals before injury defaulting to Irondale’s Derek Weinmann in the semis. Kolodge complained of an injured left knee after winning his first match but took the mat in the quarterfinals regardless. Weinmann scored a takedown early in match to pull ahead 2-0 at the end of the first period. In the second, Weinmann attempted a takedown before Kolodge crippled in pain and had to be helped off the mat after being huddled around by trainers and coaches for a few minutes. Kolodge then injury defaulted his wretleback match, ending his career.

At 152 pounds, Trey Hable ran into the No. 1-ranked wrestling the nation, Destin McCauley, who plans to spend the summer training for the Olympics. McCauley quickly built a 7-1 lead before pinning Hable one minute into the match. In the wrestlebacks Friday night, Hable beat Cory Strecker, of Roseville Area, 10-3 to move to the consolation quarterfinals. Hable pinned Brainerd/Pillager’s Nate Adams in the first round.

No. 3-ranked Hansen wrestled in a highly anticipated quarterfinals match against No. 2 Kyle Begin, of Anoka. Hansen took a 2-0 lead with a takedown in the first period before Begin notched a reverse to even the match. After a scoreless second, Begin scored another reverse in the match’s final minute to pull ahead and win 4-2. Hansen won easily in the wrestlebacks, pinning Centennial’s Will Noll in 2:20.

The Tigers’ 112-pounder Lucas Hansen and 189-pounder Conner Kortan both lost in the opening round Friday but received wrestleback matches that night.