Wilda Wagner, 87, of Lakefield, passed away on Sunday, Feb. 20, 2011, at Colonial Manor in Lakefield. A memorial service will be held at 11 a.m. today at the Osterberg-Hansen Funeral Home in Lakefield with the Rev. Jonathan Nack officiating. Burial with military honors will be held at a later date at Immanuel Lutheran Cemetery. 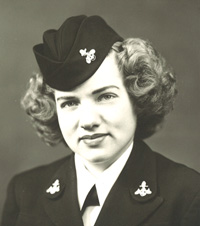 Wilda Della Wagner was born on Dec. 15, 1923, in Lakefield, the daughter of Charles H. and Rose (Seydel) Wagner. She attended District 66 Country School, Immanuel Lutheran Parochial School and graduated from Lakefield High School in 1942. She received her nursing cap from St. Mary’s School of Nursing in Rochester before going on to receive her diploma from Presentation School of Nursing in Miles City, Mont., in 1951 and finally receiving her BSN from the University of Oregon in 1966.

She was a member of WAVES from 1943 until 1945. Wilda worked for POLIO NURSING in the Western United States. From 1966 to 1969, she worked for Portland City Health Department of Public Nursing in Portland, Ore. Wilda served as the director of Nursing Education, for the Iowa Board of Nursing, from 1971 until her retirement in 1983. Following her retirement Wilda served in the Peace Corp in Liberia, Jamaica, and Haiti working in nursing education.

Wilda is survived by her siblings: Holly (Bob) Brisbane of Scottsdale, Ariz., Ray (Beverly) Wagner of Lakefield, Charles Wagner Jr. of Lake Crystal, Ruth (Elmer) Angle of Ottumwa, Iowa, Carol Williams of Albert Lea and Twylla (Kenny) Pederson of Misson, Texas. She is also survived by many nieces and nephews.

She is in a peaceful place with her Lord. Blessed be the memory of Wilda Della Wagner.