Funeral services for Adlyn Levina Nelson, 91, of New Richland, will be held at 10:30 a.m. Tuesday at Trinity Lutheran Church in New Richland. The Rev. Paul Andree will officiate. Interment will be at St. Olaf Cemetery. Visitation will be one hour prior to the service at the church.  To sign the guest book, go to www.bayviewfuneral.com. 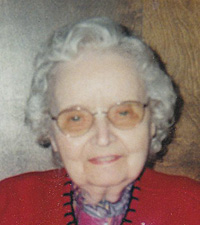 Adlyn Levina Nelson was born on Jan. 3, 1920, to Theodore and Minnie (Haugen) Lee in Hartland. She was baptized and confirmed at Hartland Evangelical Lutheran Church. She attended New Richland High School, graduating in 1937. Adlyn worked for E.F. Johnson Co. from 1942-1945. On May 31, 1952, she was united in marriage to Arthur J. Nelson at Trinity Lutheran Church. Adlyn worked as an insurance secretary for 30 years at several agencies including, O.S. Martinson, Nelson Insurance Agency and New Richland Insurance. She was an active member of the Trinity Lutheran Church in New Richland. Adlyn was always a friendly and happy person who enjoyed people. Blessed be her memory.

Survivors include her brothers and sisters-in-law: Lyle (Yvonne) Nelson of Grand Forks, N.D., Adelle Noss of Crookston, Russell Nelson of Fertile, Amanda Nelson of Gary and Maureen Nelson of Gary; and many nieces and nephews.