A small cast will produce a lot of big hits in the production of “Always…Patsy Cline,” when it opens Thursday at the Marion Ross Performing Arts Center. 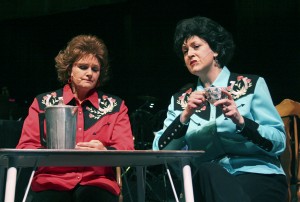 The musical revue is based on the true story of singer Patsy Cline’s friendship with Houston housewife Louise Seger. Stephanie Erdman plays Cline, and Lisa Sturtz plays Seger. Director Rory Mattson said the play centers on their relationship and friendship.

“On a very basic level they’re very much alike even though one is a single mom and the other is a person she believes to be the biggest star,” Sturtz said.

Erdman agreed and said Cline valued relationships and was a giving person. Cline and Seger were unlikely friends and were pen-pals until Cline’s death in a plane crash in 1963.

The show also follows Cline’s transformation from country artist in the 1950s to pop singer in the early 1960s. Some of the songs include “Crazy,” “You Belong To Me,” “Walkin’ After Midnight,” and “Stupid Cupid,” among many others.

“Albert Lea really loves a musical revue,” Mattson said. “This is going to be a spectacle.”

Mattson said the variety of songs will please audiences of all ages. Erdman said she’s performed Cline’s music before, but that it’s always exciting.

“The dialogue is fast-paced and witty,” Sturtz said. 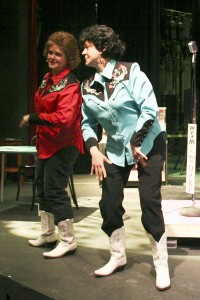 She said she was amazed at how many songs Cline sang that were made famous by other artists. Both women said the band is an important part of the show, which is made up of Barb Lang, Neil Lang, Mattson, Theresa Iversen, Jaime Kyllo and Danny Peterson.

Finding the right style of costuming and following the transformation of Cline’s career made costuming for the show difficult. Barb Lang is the costumer and musical director for the show.

“We had a difficult time trying to find cocktail dresses from that period,” Lang said.

Some dresses had to be recreated or made from scratch. In all there are nine costume changes for Cline. Her first outfits are Western-style looks, and her style changes while her music changes from country to pop.

“She goes from Western wear to high heels and cocktail dresses,” Lang said.