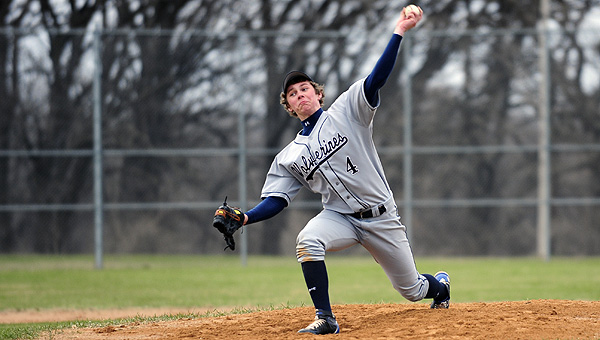 GLENVILLE — The Glenville-Emmons Wolverines baseball team rolled through three innings Monday against Truman. Then the wheels fell off.

With the Wolverines (3-2, 3-0 Southeast) leading 2-1 into the bottom of the fourth, the Bluejays (2-1, 1-0 Valley) scored five runs before recording a second out and sent eight batters to the plate. The Bluejays won 7-2.

The Bluejays scored the fourth inning’s first three runs without hitting a ball out of the infield off the Wolverines starting pitcher Spencer Kral. The fourth run scored off a single to center field and the fifth scored from second base off two throwing errors. The Wolverines committed five errors during the game and three in the fourth inning.

“We had way too many mental mistakes today,” Wolverines coach Louie Toulouse said. “We weren’t sharp in terms of knowing what plays needed to me made and when they needed to be made.”

Kral gave up six runs — four earned — through four innings before being relieved by Caleb Schumaker. Toulouse said Schumaker made improvements from his last appearance.

“He did OK,” Toulouse said. “He threw a few too many balls but only gave up one run. It’s just a matter of getting him more experience on the mound.”

Schumaker pitched the game’s final three innings in his third career varsity appearance. He struck out two and walked one. His one run allowed was unearned.

Peter Hansen led off the bottom of the first with one of the Wolverines’ two hits. Tyler Woodside had a single in the sixth and two RBIs.

Toulouse said the Wolverines didn’t swing the bat well but that mental mistakes cost them the game.