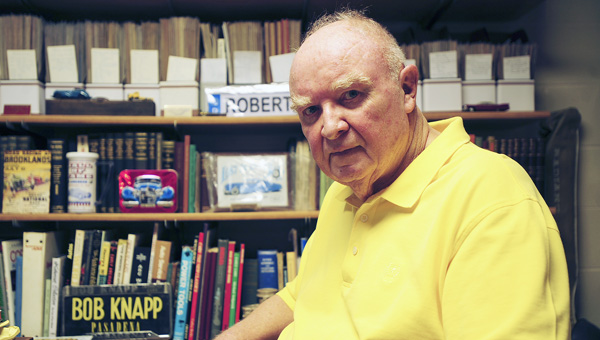 Bonneville Bob worked on an extraterrestrial landscape — where men dressed in metallic jumpsuits raced rocket ships across a barren surface.

No, it’s not science fiction. It’s the Bonneville Salt Flats, and it is Bob Knapp’s “home away from home.”

Knapp, 75, moved to Albert Lea 13 years ago. Far removed from his life as a teenager, racing drag up and down California, he now resides west of town with a youthful spirit in a basement full of memories. 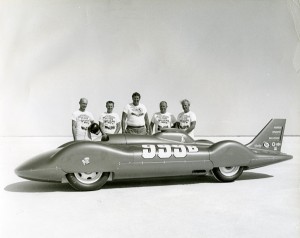 Team Herda-Knapp Milodon poses with the world-record setting No. 999B car in the Bonneville Salt Flats in Wendover, Utah. Bob Knapp is second from the right. -- Submitted photo

“I’m 75 going on 15,” Knapp said, sitting next to a wall of black and white photos of cars, engines and old friends.

Among those photos is one of Knapp with the four other young men that made up Herda-Knapp Milodon, a land-speed racing team that made history on a hot November day in 1967. At the cost of a transmission, drivetrains and multiple engines, Knapp and his crew drove a single-engine car a world-record 357 mph — a record that stood for just over 20 years.

Knapp spent time each year at the Bonneville Salt Flats in Wendover, Utah, during his 20s and 30s as the jack-of-all-trades repairman for Herda-Knapp Milodon. At one point, his team held 31 automobile racing world records according to the FIA, which is French for the Fédération Internationale de l’Automobile — a nonprofit association that certifies land-speed records.

“We went through four motors to get to that speed,” Knapp said. “We blew up engines, broke transmissions, axles and drivelines — anything there was to break.”

Knapp did a little bit of everything to build the fastest single-engine car on the planet at that time. He welded the chassis and built the running gear, among other things, of the two-toned blue car with No. 999B taped to its side.

The car was long and narrow with an aluminum body and a tail that resembled an airplane’s. It was equipped with a 450-cubic inch Chrysler V8 engine, with Chrysler Fire Power written on its side, and less than half of the super-smooth Firestone tires peeked out of the wheel well.

Knapp said building a car to drive world-record speeds took a lot of work and trial and error.

“Sometimes we’d come to a stop and have two or three flat tires,” he said. “When we crossed over 300 (mph) the problems only went up.”

Knapp said the achievement didn’t get national attention because it wasn’t picked up by the news media. Herda-Knapp Milodon’s sponsor, MacMillian Oil Co., did sent a photography team to take pictures of the team and car, though, and those photos survive in Knapp’s basement and in a few books on the Bonneville Salt Flats.

Knapp’s blue No. 999B car was shown, in color, in an ad for Autolite spark plugs on the back on an April 1968 copy of Car Life Magazine. The ad read: “When this $50,000 monster broke 4 world speed records you can bet they didn’t scrimp on spark plugs.”

Knapp first went to the Bonneville Salts Flats as a teenager when he would clean up the grease left by cars. He last went as part of a team in 1968 but still goes to this day as a spectator. He said while the number of spectators has increased from less than 50 when he was racing to thousands now, the weather is just the same.

“It’s hot as hell,” Knapp said. “I wear a sombrero because of the sun. Otherwise I get cooked right through my T-shirt.”

Knapp became interested in automobiles when, at 12 years old, he bought his car with his paper-route money. Although he couldn’t drive legally, he rebuilt the car — a 1922 Ford Model T — and drove it back and forth on his driveway.

Knapp grew up in Palo Alto, Calif., where he owned an auto repair shop and resided until 1967, when he moved to Elk River with his wife, Helen, now 74. In 1977, the couple moved to Marshville, N.C., where they worked in real estate. There, Knapp, a licensed pilot, paved a 4,000-foot runway to land his self-built Beech D18 plane, which held a pilot and five passengers. Knapp said he and his wife love Albert Lea and he still enjoys going back to the salt flats to see “the drivers go fast.”