Cub Scout Pack 105 recently held their annual Blue and Gold Banquet at St. Theodore Catholic Church. Pack 105 is sponsored by the Albert Lea unit of the Knights of Columbus. A potluck dinner was enjoyed by all. Cubmaster Janice Stensrude led in the Pledge of Allegiance and the Cub Scout Promise. The Webelos den presented the reading “Scouting is.” 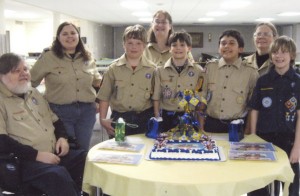 Cargill Value Added Meats awarded Debra Schatz with the Ambassador of the Year award for her dedication to the Cub Scouting Program. To recognize Debra’s commitment to community, Cargill also contributed $1,000 to the Twin Valley Council District office.

Paula Nuesmeier, district executive for Southern Trails, gave a presentation on Friends of Scouting. Support through this campaign provides programs and services in the Twin Valley Council. 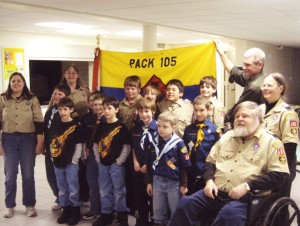 Awards were presented to the boys for all their hard work so far this year. The Bear den boys received their Bear badge. The first year Webelos den boys received their Webelos badge; activity pins for Citizen, Fitness, Engineer, Naturalist, Forester, Artist and the Compass Point Emblem. The second year Webelos received activity pins for Outdoorsman, Artist, Forester, Naturalist and a Compass Point for their Emblem. Keith Gryzbowski, Brandon Johnson, Justin Larscheidand Nathan Reichi received their Arrow of Light badge, a pack certificate for the Arrow of Light and a plaque made by their den’s assistant leader, Crystal Schatz.

Webelos Leader Dan Schatz then gave a graduation speech to the second year Webelos before they crossed over the bridge between Cub Scouts and Boy Scouts where they were welcomed into Troop 7 by Assistant Scoutmaster Don VanderPloeg.

The evening was concluded with the reading “I am a Cub Scout” by the Bear and first year Webelos dens and the singing of “Cub Scout Vespers” by them.