Memorial services for Dr. David K. Simpson, 70, of Albert Lea, will be held at 11 a.m. Saturday at First Presbyterian Church. The Rev. Dwight Netzer will officiate. Friends may greet the family one hour prior to the service. Interment will be at Graceland Cemetery with military honors accorded by area veteran’s organizations. To sign the guest book, go to www.bayviewfuneral.com. 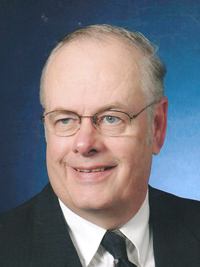 David Kent Simpson was born in Winona on Feb. 19, 1941, the son of Gerald and Helen (Nussloch) Simpson. He grew up in Marshall and graduated from Marshall High School in 1959. He attended Macalester College in St. Paul and Illinois College of Optometry, Chicago. On July 20, 1963, he was united in marriage with Susan M. Korpela in Winona. After David graduated from optometry school in 1965, the couple settled in Albert Lea where David became a partner in the Albert Lea Optometric Clinic. He was then drafted into the U.S. Army, only the second optometrist from Minnesota to be commissioned and served as a Captain in Fort Campbell, Kent., from 1967 to 1969. The couple returned to Albert Lea, and David continued in private practice until 1990, joined the Albert Lea Regional Medical Group from 1990 to 1995 and finally retired with the Mayo Health System in 2004. He was extremely proud of his 40 year optometric career serving Albert Lea and the surrounding communities. Following the death of Susan in 1997, David was united in marriage with Ruth (Ubl) McCrea in New Ulm on June 15, 2002, and they continued to reside in Albert Lea while enjoying retirement. David was a member of the First Presbyterian Church where he served as an elder. He was a member of the American and Minnesota Optometric Associations, American Legion, Elks Club and Lion’s Club. On Jan. 27, 2011, he was awarded the Lion’s Club International Foundation’s highest honor, the Melvin T. Jones Award, which recognized his 45 years of commitment to humanitarian service and positive influence on his community. David loved reading, photography, fishing, bowling, traveling and cruises.

He was preceded in death by his mother and father and wife, Susan.