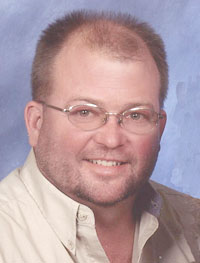 The funeral service for Erik P. Skarstad, 45, of Albert Lea, will be held at 10:30 a.m. Friday at Ascension Lutheran Church, Albert Lea. The Rev. Mark Boorsma will officiate. Interment will be in Graceland Cemetery. Visitation will be from 5 to 8 p.m. on Thursday at Bonnerup Funeral Service, 2210 E. Main St., Albert Lea, and one hour before the service at the church.

He was born on Dec. 16, 1965, in West Seattle, Wash., the son of Vern T. and Elaine (Oistad) Skarstad. His family had moved to Howard Lake and then to Albert Lea in 1976, where he graduated from High School in 1984. After high school Erik attended Alexandria Area Vocational School. He married Deann M. Loge on April 6, 2002.

Erik had worked for the city of Albert Lea for more than 23 years. He was a member of Ascension Lutheran Church where he had been active in several areas including serving on the council. He played softball for many years and also enjoyed hunting, fishing and snowmobiling. He was known to many as “E.” He enjoyed spending time with friends, working on machinery, and vehicles, driving large equipment, building legos with “Sam” and playing games with Alana. He loved spending time at the Aysta Cabin on Lake Vermillion. Some of his daughter’s favorite memories include camping, camp stories and being wakened by his infamous tickling.

He was preceded in death by his grandparents: Irvin and Hannah Skarstad and Arnold Oistad; nephew, Jared Neve; and friend, Dick Aysta.

He had a great love for his dogs and wonderful sense of humor that he shared with everyone. He will be greatly missed by many.

In lieu of flowers, memorials preferred.