Fighting for a cause 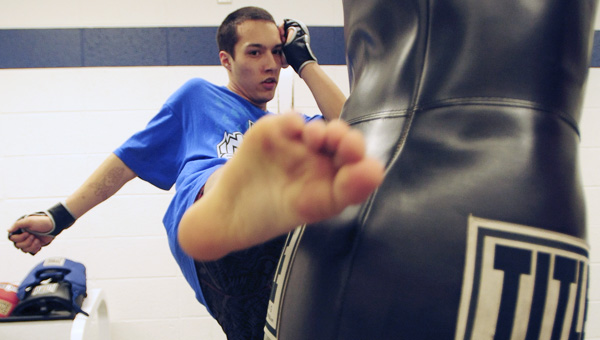 Fighting kept John Bolinger in trouble. Now it’s one of the only things keeping him out.

As co-owner of Team K.O., a mixed martial arts and boxing gym, Bolinger, 21, is working to keep kids off the street and out of jail by offering a welcoming place to fight for sport.

Along with co-owners Connie and step-son Anthony Yost, 17, Bolinger has also helped Team K.O. raise nearly $700 to be 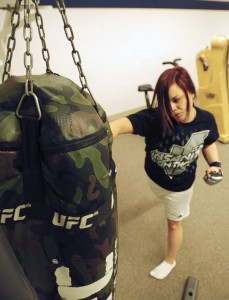 The only female member of Team K.O., Brooke Possehl, 19, hits a punching bag Friday in the basement of the Albert Lea Family Y. Possehl fights other women on a mixed martial arts circuit but fights men during training. -- Andrew Dyrdal

donated to the American Cancer Society by selling pink t-shirts. He is working on another $700 to help a 28-year-old friend with multiple sclerosis pay his medical bills.

Bolinger said if it weren’t for MMA and Team K.O. he’d likely be in prison — a statement echoed by others at their team practice Friday at the Albert Lea Family Y. But since he’s not, he just wants to help others.

“It’s something we can contribute,” Bolinger said. “We have to help people out there.”

Team K.O. has around 28 members from southern Minnesota. Those from Albert Lea train at the Family Y nearly every night and fight on Fridays, usually in Owatonna or Rochester. Most of the members are men in their 20s with tattoos up their arms and on their necks. They look tough but admit they don’t always act that way.

“We’ve had bake sales and a car wash,” Brandon Abrego, 28, said. “I’ve been watching MMA for years and nobody will mess with them. But you never hear of any fighters doing a bake sale.”

Bolinger said Team K.O. has also held a blood drive which more than 100 people attended and spent a day helping veterans with yard work and moving.

“We do anything to help,” Bolinger said. “We’re trying to show that we’re not bad people.”

But looks can be deceiving and Bolinger admitted he was turned away from some homeowners when trying to help because of the way he looks. 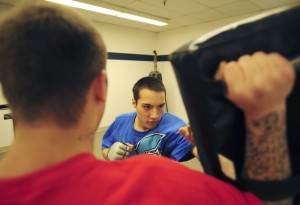 “These guys worked very hard on these shirts,” Connie said. “Nobody ever hesitates to help. They’re all fighters but they’re family people.”

Bolinger founded Team K.O. in 2009. He said he did it mainly for youth who struggled staying out of trouble like he did. Bolinger spent time in state penetentary in Red Wing for second degree armed robbery. He said fighting for sport keeps him from fighting in the streets and his teammates agree.

“I started hitting a punching bag instead of someone else,” Cory Doyle, 19, said. “Now I’m not in trouble anymore.”

Mixed martial arts helped Abrego, who’s also spent time in prison, turn his life around, too. Abrego is currently attending Riverland Community College and working toward an associate of arts degree. He also hopes to become a certified carpenter.

“I’ve always messed up my life,” Abrego said. “If it weren’t for the training and the gym I wouldn’t be in college — I never even thought about college before.” 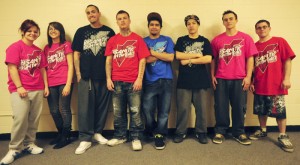 Ross Messick, of the American Cancer Society said the team’s $700 donation could house a cancer patient in a Hope Lodge for two weeks or buy 700 test tubes for cancer researchers, among other things.

“We’re going to be doing it more and more,” Bolinger said, of raising money for causes. “It’s going to keep going.”

The team will fight in Austin on June 10 and hopes to host a fight in Albert Lea in September.