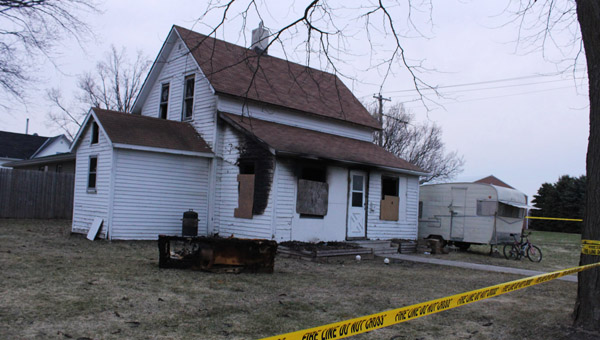 Tape at 102 N. Fourth Ave. W in Lake Mills, Iowa, says "Fire line do not cross" on Thursday and a scorched couch sits in the lawn. The fire gutted the interior. -- Tim Engstrom/Albert Lea Tribune

LAKE MILLS, Iowa — The Lake Mills Fire Department has ruled a house that burned down Thursday was a case of arson.

Lake Mills police arrested Larry Dick Smit of Lake Mills after subduing him with a Taser. He is in custody today in the Winnebago County Jail in Forest City, Iowa, on a $10,000 bond.

Smit is charged with two felony counts of arson and interference with official acts.

Fire Chief Dave Anderson said his volunteer firefighters responded to a fire at 102 N. Fourth Ave. W in Lake Mills, at the corner of Fourth Avenue and Lake Street. They encountered “a man who was disturbed” and would not let the firefighters fight the fire, he said.

Anderson said arson was ruled because a neighbor had spotted Smit allegedly pouring gas on the house and on a Plymouth Voyager minivan. Both were total losses, Anderson said.

He said the house was gutted on the interior. It was engulfed in flames by the time firefighters arrived around 11 a.m. Thursday. They fought it for about 90 minutes.

“It flashed the whole inside of the house. I would assume it would be a total loss,” Anderson said.

The firefighters then called the police.

The home was owned by Ron Langfald of Lake Mills. The former owner of a local gas service company owns 14 rental homes. He said Smit was a former tenant who was living in the camper next to the home. Smit was remodeling the home and working for Langfald, he said.

He said the home is insured and adjusters are coming next week.

Langfald said he understands the minivan belonged to Smit’s ex-wife.

“The house was a total loss,” he said.

Langfald said he could not speculate on what prompted Smith to allegedly start fires.