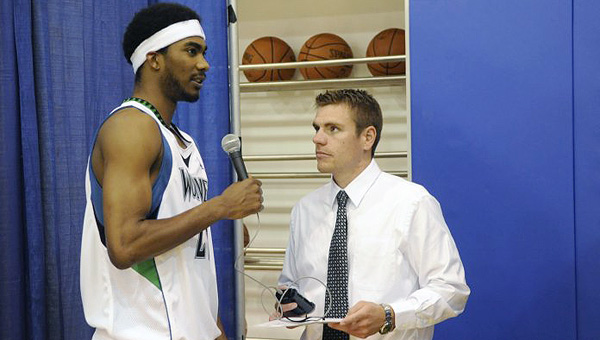 John Focke loves to tell stories. As a kid, he watched Marv Albert relay stories of professional basketball players to a national audience on NBC and dreamt of one day doing the same. After four years as sports director at KATE Radio in Albert Lea, Focke is living that dream.

Focke, 30, is the executive producer and studio host for Timberwolves Radio Network. When he has to work late, that actually means the Timberwolves went into double overtime. When he has an important interviewee, that might be Larry Bird or his childhood hero Dominique Wilkins. Focke calls those his ‘Holy cow’ moments, but said being offered the job was the most surreal.

“It’s a dream job,” Focke said. “I’m extremely lucky and one of 32 people in the country that get to work for an NBA franchise in this capacity.”

Focke, who grew up in St. Paul, said he was fortunate to be able to move from Michigan’s upper peninsula — where he was broadcasting Northern Michigan University athletic events — back to the Twin Cities in October 2007, and that when Focke called his brother to tell him the good news he was asked, “How did you pull that off?”

“I’ve worked hard and have been lucky enough to put myself into a position to accept a job like this,” Focke said.

Focke graduated from Ohio University in 2002 with a degree in telecommunications and video production. His first job out of college was with KATE and in August of 2002 he moved into the upstairs apartment of a home on North Shore Avenue and began his career in Albert Lea.

“It was the perfect job right out of college,” Focke said. “They had a great staff and let me step in and figure it out on my own.”

Focke said when he began at KATE, he planned on hosting shows on national sports until Vern Rasmussen offered him advice.

“He helped me figure out that people in Albert Lea wanted to hear about things happening in their community, not at the national level,” Focke said, of Rasmussen. “That was an eye-opener for me because I had never really thought about it that way.”

Focke said he found his voice at KATE and because the radio station broadcast live from 6 a.m. to 6 p.m., he had plenty of time to hone his skills.

“Everybody helped me along the way,” Focke said. “I had a lot of time to practice on air whether it was giving updates or doing play-by-play. We were doing a lot of games — a couple basketball games, a couple hockey games and a wrestling match each week. It was a team effort of everybody stepping up to lend a hand to do as much broadcasting as possible.”

When Focke looked back at his time with KATE, he said the winter sports seasons of 2005 and 2006 stood out as the most exciting — but he almost missed the chance to cover them.

In May 2005, Focke left KATE to work as sports director at WDOR Door County Radio in Sturgeon Bay, Wis. The new job turned out to be unlike Focke expected but in September the sports director that replaced him at KATE unexpectedly quit and Focke was able to return to Albert Lea after four months away.

In the first winter sports season during his second stint at KATE, Focke, along with Tom Jones, covered the Albert Lea boys’ hockey team in the section finals against Rochester Lourdes in St. Peter in February 2005.

Focke said his broadcast table was small and in the middle of the Albert Lea fans. When the Tigers won in overtime, it was a moment he’ll never forget.

“The pandemonium that ensued was just fantastic,” Focke said. “Kids were climbing over us and the kids on the ice were throwing their gloves — one landed on our equipment.”

Focke said that was part of a span of weeks that included Albert Lea section girls’ basketball, state boys’ basketball and state wrestling. He spent little time in Albert Lea as he was driving from St. Peter to Rochester to Minneapolis and finally to St. Paul, where he stayed at his parent’s house or what he referred to as his hotel.

Focke worked at KATE until August 2006 when he was hired to cover Northern Michigan University athletics for Northern Star Broadcasting in Cheboygan, Mich. In October 2007, Focke was hired as a radio producer for Timberwolves Radio.

As a rookie with the team, Focke voiced a couple segments of the pre-game show, all of the halftime show and one segment of the post-game show. In March 2008, 1 1/2 years removed from his job at KATE, Focke received the opportunity of a lifetime.

On March 4, Alan Horton, Timberwolves Radio play-by-play announcer, was sick and unable to work a home game against the Charlotte Bobcats. Focke was called to replace him with little time to prepare.

“I was living at home at the time because I had just moved back from Michigan and didn’t have time to find an apartment,” he said. “I got a call from the boss who said ‘The Bobcats broadcast is yours.’ My parents had dial-up Internet at the time but I went online to do some research. By the time I had printed out the Bobcats’ roster sheet the printer was out of ink and the computer was totally frozen.”

Focke said he rushed to the Target Center where he was able to familiarize himself enough with the visiting team to call the game.

“It was a whirlwind of a couple days,” Focke said. “It was awesome and couldn’t have been more fun. The cool part was my friends and family got to listen by tuning in on the radio or at NBA.com. It was just awesome.”

While Focke hasn’t called an NBA game since, he’s been promoted to executive producer and studio host, and is not only involved on the radio but on the Timberwolves’ website, too.

Focke now anchors the team’s pre-game, halftime and post-game shows and does in-game updates. He also does daily updates for affiliates as well as a half-hour long show aired weekly. Focke’s voice is heard on Timberwolves.com every Tuesday as he and the team’s web producer Jonah Ballow host a web-only show called 5-on-5.

“I’m working to expand my horizons as much as possible,” Focke said. “There’s a lot of different ways you can get involved in the broadcast world.”

Focke said his ultimate goal is to become the play-by-play announcer for a professional sports team. He said while he would also enjoy working for a national broadcaster like NBC, he would rather work for a specific team because of the opportunity to get the know the players and their stories.

“That’s what I learned in Albert Lea,” he said, “By getting to know Ben Woodside, and Parker Skophammer and his grandparents. You get to know kids and their stories, and relate those stories to an audience. That’s the most fun.”