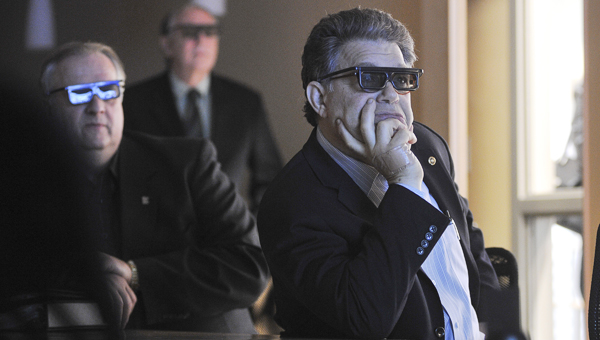 AUSTIN — After touring the Hormel Institute for the first time Wednesday afternoon, U.S. Sen. Al Franken said Minnesota is on its way to being a leader in biotechnology.

“The medical industry in Minnesota has produced so many jobs,” Franken said. “Minnesota should be a leader of biotechnology.”

Franken made his visit to the Hormel Institute as part of a southern Minnesota tour to discuss energy, health care, economic development and jobs.

On the tour, Franken had the chance to view 3-D imaging technology that is used for drug development. Sitting in a conference room wearing 3-D glasses, the senator learned what a cancer cell in a green onion looks like surrounded by proteins. The 3-D imaging technology is part of the Institute’s International Center of Research Technology, or ICRT, which has been expanding thanks to almost $2 million in federal funding.

Franken said the work done by scientists at the Institute is impressive and invaluable, and he hopes the research center will continue growing.

“To some degree, this is something we have to do in the state,” he said. “Biotechnology … has an absolutely huge potential.”

Franken also touched on the potential another expansion could hold. While the Hormel Institute tripled its size and doubled its number of faculty and staff in 2008, Franken said another expansion would only be a good thing for the community of Austin and Minnesota as a whole.

“If they’re expanding here … for Austin that means more employment, more scientists who are doing a very high value job, more kids in the schools,” he said. “To the state … that means jobs and prosperity in the near-term.”

The Hormel Institute’s research in Austin, coupled with the University of Minnesota and Mayo Clinic, gives Minnesota an advantage over other areas of the U.S. that focus in research, Franken said. He called the area a “triangle” and said he would like the three entities to continue working together.

“(I have a desire) to commercialize not just the research we do here, but at the University of Minnesota and Mayo,” he said. “One of my jobs as senator is to create jobs, and I feel like there’s great opportunity here to do that.”