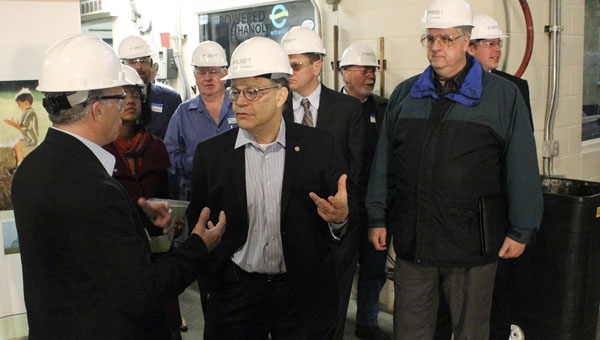 GLENVILLE — Get ethanol at the pumps.

That’s what the farmer owners of the Poet Glenville ethanol plant told Sen. Al Franken they would like to see. The comments came during a meeting Wednesday at the plant.

“We want consumers to have a choice at the pump,” said Gary Pestorious, one of the plant’s owners.

What motorists would see when they go to gas stations is conventional gas and what are called ethanol blender pumps, capable of providing ethanol blends for flex-fuel vehicles. 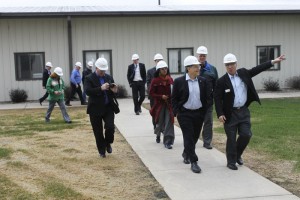 Some of the farmer owners of the plant, Poet Glenville General Manager Rick Mummert and officials with Sioux Falls, S.D.-based Poet Biorefining told Franken they would like to see a phasing out of federal subsidies for ethanol in exchange for government support of investments in blender pumps and ethanol pipelines and encouraging automakers to build flex-fuel vehicles. The plan is called the Freedom Fueling Plan.

They added the plan includes a measure termed the Volumetric Ethanol Excise Tax Credit, or VEETC, which would provide oil companies with an incentive to blend ethanol with gasoline.

The other senator from Minnesota, Amy Klobuchar, introduced just such a measure March 10. It’s in a bill called Securing America’s Future with Energy and Sustainable Technologies Act. The SAFEST bill has been endorsed by an array of farming organizations.

“We want to make sure there is a market for ethanol,” Franken said.

He said Midwestern senators from both sides of the aisle understand this but senators from oil-rich states work to suppress the comparitively young industry.

He said some politicians make arguments about the fuel and fertilizer it takes to grow the corn, then to make the corn back into fuel. Some also make arguments about how ethanol affects food prices. Franken said they fail to understand renewable fuels are part of the answer to dependence on foreign oil and fail to realize how improvements in ethanol technology hold promise for the future.

“I think Washington doesn’t totally get it,” Franken said. 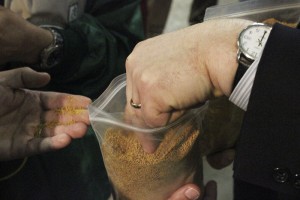 He and Mummert both cited Poet’s construction of a cellulosic ethanol facility that makes ethanol from corncobs as an example of an advancement that gives a value-added aspect to corn growers without taking away from the many uses for the kernels.

(Most field corn grown in America is used for feeding livestock and for producing cereals, alcohol, starches, sweeteners and corn flour. Food in the form of kernels comes from sweet corn and is about 2 percent of the U.S. corn crop. Popcorn is a different species altogether.)

Mummert said market access remains the biggest challenge facing the ethanol industry. He noted that the United States is trying to get OPEC to raise oil production when meanwhile ethanol is being exported to Brazil and Saudi Arabia.

Next door to the Poet ethanol plant a biodiesel plant by the name of SoyMor has sat unused for three years, having been shut down as a result of high prices in the commodity market for soybean oil. It once employed 35 people.

Many biodiesel plants across the country closed as a result of the high prices.

Franken recalled that one reason the biodiesel producers couldn’t offset the high prices was that Congress failed to extend the biodiesel credit. He noted that Congress was able to get the credit going again during the lame-duck session at the end of 2010.

“Maybe some of these plants can come back online,” he said.