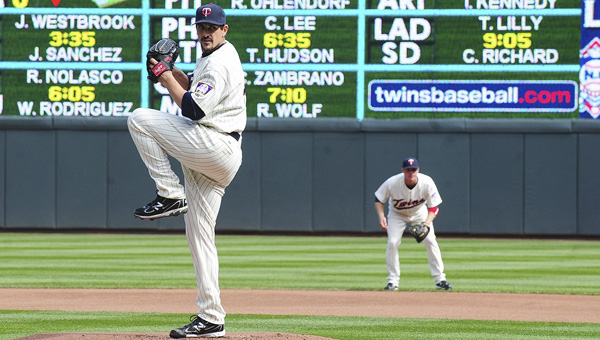 Twins rallied in 8th for 2-1 win at Target Field

MINNEAPOLIS — Target Field had a lot improvements made this offseason. The team that plays there didn’t.

But after another poor offensive start, the Minnesota Twins rallied from one down in the eighth inning off a go-ahead single by Joe Mauer and won 2-1, opening their home ballpark for its second season in dramatic fashion.

Trailing 1-0 with two outs in the eighth and Danny Valencia on first, Twins manager Ron 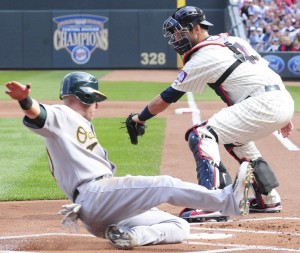 Gardenhire pinch-hit Jason Kubel for shortstop Alexi Casilla. Kubel ripped a pitch fair down the right field line for a single, advancing Valencia to third. Denard Span singled in the next at bat, scoring Valencia and tying the game, and Mauer singled past a diving third baseman to left, putting the Twins on top 2-1. After Justin Morneau flew out to end the inning, Joe Nathan, who missed all of last season recovering from Tommy John surgery, faced four batters in the ninth and picked up his first career save at Target Field.

The crowd roared as Oakland’s Hideki Matsui popped up to shortstop and the Twins secured a win in their home opener for the second consecutive year.

“The crowd was unbelievable,” Gardenhire said. “Packed and just how we remember it at the end of last year.”

The win was also the first in a series opener this season. The Twins entered Friday’s game 2-4 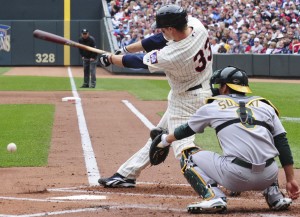 after losing series at Toronto and New York.

That trend looked like it would continue in the home opener as the Twins gave up a first-inning run for the fifth time in seven games and were stymied by A’s starter Brett Anderson through seven innings. By the end of the game, only four starters were batting above .200.

“We haven’t been very good to start the season,” Mauer said. “But to get a win like this, sometimes that changes things and guys can get on a roll. We just need to keep grinding it out.”

Carl Pavano (1-1) earned the win for the Twins after throwing 106 pitches over eight complete innings.

Like the season opener at Toronto, Pavano was again shaky in the first inning. After getting the A’s leadoff batter Coco Crisp to fly out, Pavano walked Daric Barton. During the A’s next at bat, Barton advanced to second on a wild pitch and to third on a throwing error by Pavano. David DeJesus hit a sacrifice fly to Span, scoring Barton, before Pavano settled down for the rest of the game. He ended up allowing four hits, while walking one and striking out one. 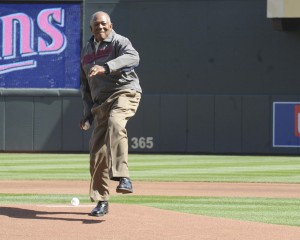 Twins legend Tony Oliva threw out the opening pitch Friday in front of a sold out crowd at Taget Field. -- Buck Monson/BuckMonsonPhoto.com

“I was a little to anxious,” Pavano said. “I tried to slow myself down. I got a second wind and started throwing better pitches.”

Pavano said after his poor outing the last time he took the mound — seven earned runs in four innings pitched — he put pressure on himself and knew the team needed a win.

The Twins’ win came in front of a sold-out crowd of 40,714. The home team was 53-28 at Target Field last season, which underwent some improvements for 2011. The most notable improvements Friday were the video screen above the seats in right field thatmeasures 28 feet high by 50 feet wide, and the 100-foot Twins Tower, which displays graphics and players throughout the game.

Another noticeable difference at Target Field Friday was center field, where a black wall now stands instead of a row of pine trees. The pine trees were removed this offseason after players complained of not being able the see the ball out of the pitchers’ hand. Mauer said after Friday’s game that he could see the ball better without the trees but also because of overcast skies.

The Twins played Oakland again at 6 p.m. Saturday and conclude the three-game series today at 1 p.m.