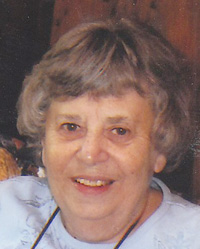 Memorial services for Helen Margaret Bucklin, 77, of Albert Lea will be held at 11 a.m. Friday at Bayview/Freeborn Funeral Chapel. The Rev. John Holt will officiate. Interment will be at Oakwood Cemetery in Austin. Visitation will be from 5 to 7 p.m. Thursday at Bayview/Freeborn Funeral Home and one hour prior to the service. To sign the guest book, go to www.bayviewfuneral.com.

Helen was born on Dec.27, 1933, to Mary and Elmer Meister of Austin. She had four sisters and one brother. She attended school in Austin. She enjoyed playing the piano and violin. While a junior in high school she started working in the accounting department at J. C. Hormel and Co. She worked there until after George and Helen were married and George Kane was born. In the next 2 1/2 years they had two more sons, Robin Lee and David Todd. She quit her job to raise their three sons. Seven years later Jeanne Ellen was born and in two more years Jayne Elizabeth was born. Helen was a full-time mother and homemaker for 20 years. Her husband George, of 57 years, was a bricklayer and stone mason. In 1973 the family moved to Albert Lea to own and run the Donut Kettle. Husband, George, and son, David, were bakers, the girls, Jeanne and Jayne worked with customers, and Helen was in charge of the employees, books and payroll. Helen usually had a craft project going and enjoyed a good game of bridge and “500” and playing a game of “31” with her grandkids. She was such a loving, caring and supportive mother, grandmother and great-grandmother. She battled cancer for many years and will be greatly missed by her family and friends.

Survivors include her husband, George M. Bucklin, of Albert Lea; son, George K. Bucklin, and wife, Uan, of Bangkok, Thailand; son, David T. Bucklin, and wife, Joyce, of Mountain Lake, and their children: David of Ft. Lauderdale, Fla., Anna and husband, Ryan, Gerber and daughter, Cameron, of Ankeny, Iowa, Dima and Nadya both of Mountain Lake; daughter, Jeanne E. O’Neal, and husband, Scott, of Houston, Texas, their children: Ryan and Jordan both of Houston, Texas, and daughter, Jayne E. Iverson and husband, Chad, of Hayward and their children: Emma and Noah both of Hayward; granddaughter, Laurel Bucklin of Portland, Ore.; sisters: Barb, Mary Jo and Suzanne; and brother, Charles.

Helen was preceded in death by her parents; her son, Robin Lee; and her oldest sister, Elizabeth Roehrich.